​For ​Liverpool fans, there is a familiar feeling in the air this season. It's been almost a decade since the Reds were competing with the best teams in Europe for the ultimate prize, but now they are just 90 minutes away from a first Champions League final since 2007. In an era of Spanish dominance, Liverpool are ready to fly the flag for England once more.

And yet... it would not be Liverpool if there weren't some issue, some moment of self-destruction. On Monday, it was announced that Klopp's assistant manager Zeljko Buvac ​would be taking a leave of absence until the end of the season, citing personal reasons.

And all of a sudden there's a different feeling in the air, as familiar as the one which came before. Because haven't we been here before? Haven't we seen what happens to Liverpool when the fissures start to show?

Everyone knows that it was Rafa Benitez who wrote his name into Liverpool folklore as the man behind the greatest moment in the club's history. It was he who masterminded Liverpool's 2005 Champions League win, when they produced a comeback every bit as stirring as the one Roma need on Wednesday evening. 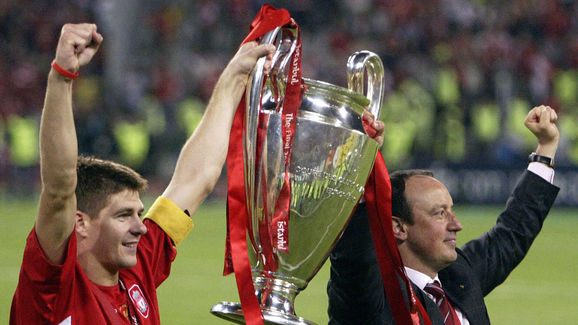 Few people remember Pako Ayesteran. Benitez's assistant manager was every bit as humble and unassuming as Klopp's, living in the shadows on matchday but filling Melwood with his warmth and his tactical awareness.

If Buvac is the brains to Klopp's heart, the relationship between Ayesteran and Benitez was quite the opposite. Ayesteran was often the man to make personal connections with the players, while Benitez spent his days scheming behind the scenes. They formed a formidable duo, yet most Liverpool fans didn't realise what they had until it was gone.

On 1st September 2007, Ayesteran announced that he would be leaving Liverpool. Benitez had labelled him a "traitor" for talking to other clubs without consulting him first; Ayesteran claimed that Benitez had "forgotten his principles". Six years later, Ayesteran revealed in an interview that the two still hadn't made amends.

All of a sudden an 11-year relationship was over. Ayesteran stayed in Liverpool for several years afterwards, before taking his first manager role in Mexico in 2013. Meanwhile, Sammy Lee took Ayesteran's job at Anfield and they never recovered from there. Revisionist history has it written that Ayesteran's exit was the turning point in Benitez's Liverpool tenure, the point of no return from which the Spaniard never recovered. But that is simply not true. Without Ayesteran, Liverpool reached another Champions League semi final and finished 2nd in the Premier League, higher than in any season while he was at the club.

However, it is true that Benitez never won another trophy at Liverpool after Ayesteran left, and it is also true that the house of cards Benitez had built eventually came tumbling down. Less than a year after finishing 2nd, Benitez left Liverpool by mutual consent with the Reds 7th in the Premier League.

But it is all hypothetical. Rarely do managers rely so heavily on one man that they simply cannot cope without him. Sir Alex Ferguson had seven different lieutenants during his time as ​Manchester United manager. And besides, an assistant manager is just one part of a whole network of backroom staff. Pep Guardiola's team at ​Manchester City is a prime example. His performance analyst, fitness coach and head of player support are all trusted figures who have followed him from ​Barcelona to ​Bayern to City. But his assistant coaches - four of them - have not been so precisely assembled.

Domenec Torrent and Rodolfo Borrell were with Guardiola at his previous clubs, but Brian Kidd was already at City before Guardiola arrived and Mikel Arteta is in his first coaching role. Clearly, it is the wealth of different opinions that these men can offer which matters most to Guardiola, not their origins or years of long service to him.

The best example of a manager who couldn't survive without his assistant is of course Brian Clough. It is no coincidence that the statue of the great man outside Derby's Pride Park depicts him alongside Peter Taylor. The two were inseparable for almost their entire careers, and their best years at Derby and later Nottingham Forest were shared together.

When Clough tried to go it alone at Leeds, he failed spectacularly, and was famously sacked after just 44 days at Elland Road. He reunited with Taylor at Forest and went on to win two European Cups. The reason why there's a super-successful book and film about this story is because it is the exception, not the rule. The contrast between Clough and Taylor's partnership and the many-faceted team at Manchester City in 2018 is extreme. There are so many cogs turning behind the scene at a football club these days that it is rare for them all to be integral. If one goes missing, another can be moved to replace it.

That is what is now happening at Liverpool, with Peter Krawietz expected to step up to the mantle in Buvac's absence. Known as 'The Eye' for his scouting and analysis, Krawietz has followed Klopp from Mainz to Dortmund to Liverpool, witnessing the way he works on a daily basis. He is no less qualified than Buvac to be Klopp's right hand man.

It's important to have contrast, but a football club is not reliant on two individuals, or even three. It is a melting pot for many different personalities, and the loss of one need not affect the overall mixture. So those prophesising Liverpool's demise may be sorely disappointed. Klopp remains, Salah remains, and the Reds remain 90 minutes away from a date with destiny.