FanView: It's a Travesty That Kevin De Bruyne Will End This Season Without Any Individual Honours

As the 2017/18 campaign draws to a close, now seems like an appropriate time to take stock of what has been another highly entertaining ​Premier League season.
​

We may not be heading for any final day drama this time around, with the Premier League title wrapped up already, but it's still been a year full of talking points and fantastic individual quality.

The Football Writers' Association Footballer of the Year 

What a season it's been for Mohamed Salah 

That fantastic individual quality has been characterised by ​Liverpool superstar Mohamed Salah in the eyes of the majority - he recently won the PFA Player of the Year award, ​and has just today been bestowed the Football Writers' award.
​

Apparently Salah edged the latter by the smallest margin since 1969 ahead of Manchester City's Kevin De Bruyne. That'll come as little consolation to Belgian, who must be feeling hard done by at this point. Quite simply, he has been absolutely sublime for the 2018 Premier League champions.

Mohamed Salah might win PFA Player of the Year, but no doubt in my mind that Kevin de Bruyne is the best all-round player in the Premier League. It's not even that close (for me).

Take nothing away from Salah, whose goalscoring record has indeed been unbelievable, but De Bruyne has led the charge of one of the greatest teams to ever grace English football.
​

It seems a great shame that a player who has been so consistently fantastic throughout the 2017/18 won't have any form of individual award to show for his efforts.
​

A lot of football writers did vote for De Bruyne, but not enough. The ideal scenario would have been for Salah to win one award and De Bruyne the other, since they have both been equally as excellent for their teams this term.

Mohamed Salah has been named Footballer of the Year by the Football Writers' Association.

In another season De Bruyne would have scooped both - the captivating way in which he is able to influence games in terms of goals, assists and pre-assists (yep, we'll go there) has been breathtaking. His general range of passing and his general control of games has been simply spellbinding.
​

Salah's goalscoring exploits have obviously been well documented, but there have been a few more games for him than De Bruyne where the Egyptian has been on the periphery. Seldom does KDB ever have a quiet day at the office - he's the heartbeat of one of the most potent attacking forces in world football today. Salah is ever so slightly below his rival in that sense.

Mohamed Salah wins the FWA Footballer of the Year award. I confess I voted for Kevin De Bruyne but Salah is a worthy winner.

Goals will always grab all the headlines and attention, but it feels as though the all-round game of a world class player is going under the radar here.
​

The maestro's stats do not stack up against Salah's, but football is not all about the stats these days - it goes way beyond that. Although if we do want to focus on those for just a second, then the experts over at the CIES Football Observatory (via the ​Star) will tell you De Bruyne has been the second-best 'technical' midfielder in Europe this season, with an average score of 95.6 out of 100 - only the resurgent James Rodriguez at ​Bayern Munich has a greater score. 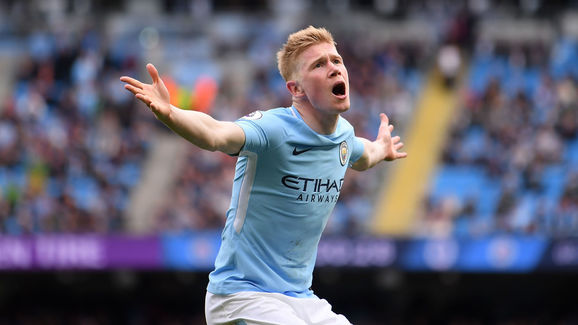 The cynics will say that if you took De Bruyne out of the ​Manchester City team then they would still have won games and won well, since there's been quality in abundance for Pep Guardiola, but that simply wouldn't be the case.
​

The 26-year-old has played with a frightening mixture of power and precision this term. There's an aura about him now in the centre of the park. Sometimes this is evident in the way opponents behave around him - the way they stand off him almost in fear of his ability, afraid of either wasting energy or being made to look silly.

Salah may have won both individual end of season awards, but it seems a total travesty that the world class De Bruyne won't get his due credit.
​

Despite their image, a lot of footballers work hard for such acknowledgement and it's not about the extortionate weekly wages they receive. For some it is, but in the case of the supremely talented, hardworking and consistent De Bruyne, you get the feeling it simply isn't.​