Barcelona clinched their 25th domestic league title on Sunday ​with a 4-2 victory away at Deportivo La Coruna, and the hosts even provided a guard of honour before the game for the new Copa del Rey champions.
​

Next weekend it's El Clasico, and there's been a lot of talk about whether or not ​Barca's bitter rivals ​Real Madrid will line up for them at the Nou Camp. 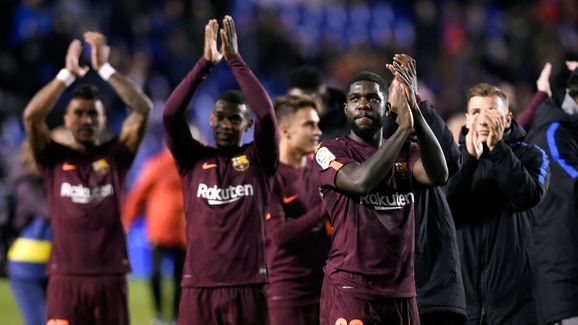 If Los Blancos captain Sergio Ramos and his manager Zinedine Zidane have their way, then there will be no such sign of respect.
​

Speaking ahead of Tuesday's return Champions League leg with Bayern Munich, the Spaniard said, as quoted by ​Goal: "What [Zinedine] Zidane says is gospel.

"We're making too much fuss about all this. Barca have the title, which is what they wanted, but there will be no guard of honour full stop.

"They want to enjoy their title and the same for us and ours, we need to eliminate the Germans [​Bayern Munich] and to reach another final [of the UEFA Champions League]."
​

Barca full back ​Jordi Alba on the other hand, believes La Blaugrana should receive a guard of honour, as would usually be expected. He said, as quoted by ​AS: "It's not a decision we take, everyone has respect for those who want to. The Club World Cup was a competition we didn't play in. At the [Santiago] Bernabeu, in the league, we have previously performed a guard of honour. If they don't want to give us a guard of honour it will be because it comes from upstairs."
​

The 'upstairs' Alba is referring to could mean club supremo Florentino Perez, who would surely hate to see his side honour their most bitter rivals for the sake of tradition.