W90
WorldNews
Lists
Next Article
Who should sign Declan Rice?

With the game evenly poised at 1-1 with ten minutes remaining, 19-year-old defender Rice seemingly ducked under Welshman Aaron Ramsey’s cross, allowing the ball to nestle in the back of the net.

Moyes came down hard on Rice after the match, who set himself up for another uncomfortable Sunday evening after playing a key part in Manchester City's second goal at the London Stadium this weekend. 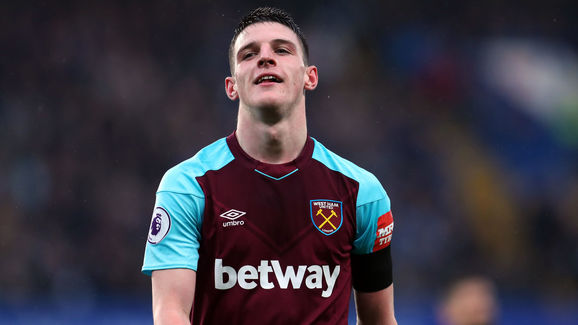 Former England international Merson slammed Moyes for his criticism of the young defender in his column in his ​Daily Star, writing: “David Moyes is still the right man for ​West Ham – even though he made a mistake digging out Declan Rice.

“I don’t like it when a manager does that to a young player, I think it’s wrong. You can do it in private in the dressing room. But Rice is 19. There’s no need.

“The young player makes a really poor mistake for the second goal. I hope he learns from it because he’s got big potential, but I think it really flattened the team.”

The 50-year-old former ​Arsenal forward turned TV analyst, went on to question the club’s fan base, claiming that Moyes side are just about good enough to stay in England’s top flight.

“What do the fans want? Good football? You can only play good football if you have good players. Moyes knows that.

“They’re talking about the 1960s when they had three World Cup winners in their team. How many times have they played like that since? They played “the West Ham way” one year and got relegated. With a much more talented side than this one. Is that what they want?”