Cesc Fabregas' 50th ​Premier League goal proved to be decisive, as Swansea fell to a defeat at the hands of Chelsea at the Liberty Stdaium, despite a late flurry of chances from the home side.

Carlos Carvalhal's side lacked urgency and creativity in the first half of the game, but turned up to the second half with added tenacity, in an attempt to claim all three points - just as their relegation rivals ​Southampton and ​Crystal Palace did earlier in the day.

​Swansea now sit just a point ahead of Southampton outside the relegation zone in 17th, but Carvalhal has insisted that their fate still remains in their hands. 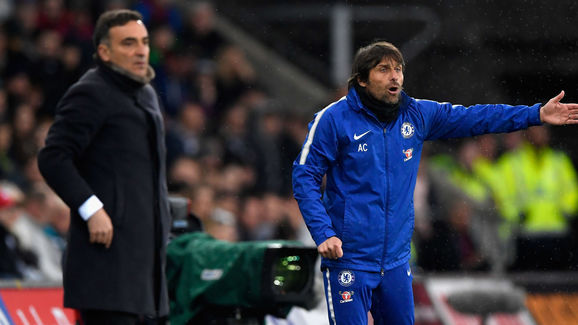 “At that moment people were talking about miracles – I remember the first day very well.

“Now we have one away game and two home games left and we must take the points we need.

At the bottom of the #PL table, things are starting to get a bit squeezed... pic.twitter.com/MIQsoSt8YQ

“When I arrived, we were depending on others, but now we just depend on ourselves.

“If when I came here I said we will compete in the last three games to stay up, nobody would have believed me.

“But it’s in our hands and now we must look at the games we have left and try to achieve the necessary points to stay in the division.”

He believes their commitment can keep them from relegation.

​Chelsea became only the fifth team to beat Swansea since Carvalhal took over, following in the footsteps of ​Manchester City, ​Manchester United, Brighton and Swansea, but has insisted that his side competed well when up against those sides.

“Four of those are massive clubs and in the home games where we lost we have competed very well,” Carvalhal added.

“We lost at ​Brighton, but we have taken points against everyone else. That is what we must continue doing in the three remaining games.”