World Cup Countdown: 8 Weeks To Go - When the World Witnessed Diego Maradona's 'Goal of the Century'

​For many an English football fan, the World Cup of Mexico in 1986 will remind them of one moment: Diego Armando Maradona's infamous 'Hand of God' in the quarter finals.

Still standing as one of football's most iconic moments in history, it is the Argentine's second goal against the Three Lions that day that is sometimes forgotten for its sheer magnificence and footballing - nay sporting - wizardry that few goals can hold a candle to, even to this day.

Maradona's second at the Estadio Azteca that afternoon was voted as the greatest goal ever scored in World Cup history, and few could argue this status.

With both and England and Argentina sharing one of football's fiercest and hostile rivalries there was, on a scorching day in the capital the incident fanned the flames to almost levels approaching inferno in the sixth minute of the second half.

As the watching world swallowed from perhaps what was and still is football's most infamous moment, four minutes later however, shock turned to awe.

With the English players' eyes lit up like beacons - gunning for Maradona - the Napoli man received the ball from team-mate Hector Enrique inside his half and began his fateful dash through Three Lions' half.

It is often forgotten, but the goal's greatest piece of skills was at the very embryonic stages of the move. With both Peter Reid and Beardsley for company, Maradona threw the two off the scent with the most sublime Cruyff-esque turn to race into space and into the England half wide on the right.

As the Argentine veered toward goal, Terry Butcher raced out but was brushed aside but a deft angled flick forward by his left boot, with Terry Fenwick left in his wake.

With Maradona baring down on goal, Butcher tried in vain to race back to cover but despite the efforts of goalkeeper Peter Shilton to close the angle - moments after being cheated in the most despicable way - evaded the Derby stopper and skipper. 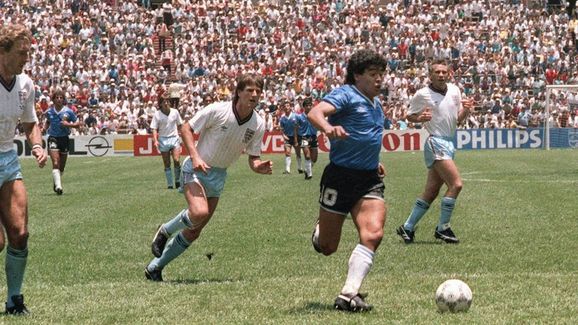 The Argentinian waved his magic wand once more dragging both Shilton and Butcher wide again, to loft the ball into the England net, as a the jaw of a collective footballing world plummeted to the floor.

Those four minutes were perhaps the definition of sporting juxtaposition. How could two of the most talked about goals in football history occur within mere minutes of each other? From the 'hand of god' moments earlier to 'the goal of the century', both by the chief protagonist in question.

As Argentina held on for victory after Gary Lineker's 81st-minute goal, there was a still a huge sense of robbery on the part of English fans and indeed the team, offset having witnessed a moment that has still to truly be eclipsed even by the likes of messrs Ronaldo or Messi. 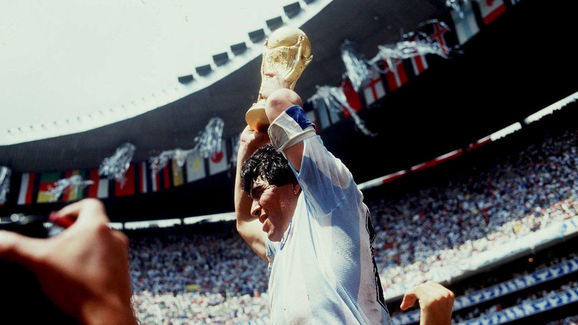 Albiceleste went on to lift the World Cup that summer, beating West Germany 3-2 after a titanic tussle in the final with Jose Luis Burruchaga sealing a thrilling win as the Germans lost successive finals.

Whilst in the timeless realm of football the controversial has undoubtedly won out over time as one of the World Cup's most notorious incidents, 'The Golden Boy' and his second goal on that afternoon surely earned Maradona's reputation of a player that loved to be hated.

As the BBC's Barry Davies so eloquently put it of Maradona's goal after such sporting injustice so soon before, 'you have to say that is magnificent'.