​Arsene Wenger is ready to end his ongoing feud with Jose Mourinho as the outgoing Arsenal boss prepares for one last showdown with bitter rivals ​Manchester United.

The veteran manager will head to Old Trafford for the 28th and final time as Gunners gaffer on Sunday as he slowly brings an end to his 22-year reign in north London.

Speaking to the press (h/t the ​Mirror) ahead of one last bout with the old enemy, Wenger was quizzed about his relationship with Mourinho after some spectacular fall outs between the pair down the years. 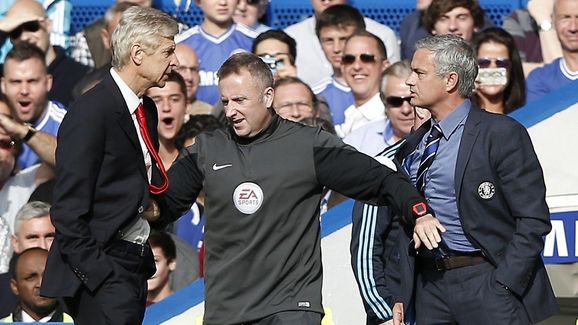 Wenger and his counterpart have become embroiled in scuffles both on and off the pitch during the times in the ​Premier League, but the 68-year-old wanted to put all that water under the bridge as he eyed a peaceful end to his tenure with ​Arsenal.

“Will we be friends? It ­depends…I respect him a lot of course. You should give me a little bit of peace for my final weeks, don’t push me into a final confrontation. I want to go peacefully and Mourinho as well, he’s a great manager.”

Arsene Wenger confirms he met Manchester United and turned down chance to become their manager when Alex Ferguson was going to leave in 2002: “I don’t regret turning down the United job. Arsenal is the love of my life”

Wenger has managed to see of United 19 times in 59 matches against the Red Devils, but has tasted plenty of defeats too against Mourinho, Louis van Gaal and legendary opponent Sir Alex Ferguson.

A few of those maulings - the 8-2 demolition and 6-1 defeat spring to mind - have proven to be sorry affairs during Wenger's reign, but the Frenchman added that he realised just how good United were as he looked back on his time taking them on at their home ground.

When Arsene Wenger got sent off at Old Trafford...

Every Man United's favourite moment of his career! 路‍♂️ pic.twitter.com/dkNBk0oSZg

He said: “Man Utd is a massive club with fantastic players. When I go back I ­realise what a great team they were. They had (Ryan) Giggs, (Paul) Scholes, (David) Beckham, (Cristiano) Ronaldo and (Wayne) Rooney together as young players.

“Then you see what they have done later and that shows the challenge. (Ruud) Van ­Nistelrooy and all these players together. They had an unbelievable team. I realise that better at a distance than at the time.