These days, Lineker's record as a footballer has become almost forgotten. He's a very handsomely paid television anchor on BBC - you know, that Leicester fan who once presented Match of the Day in his underpants for a bet - and BT Sport, a serial tweeter with over seven millions followers, and the face of Walkers crisps for the past 23 years and counting.

To many young football fans, certainly those who only associate him with presenting Match of the Day, the fact that Lineker was once a world class goalscorer may be completely lost. At this point, it is worth pointing out that only Jimmy Greaves, Thierry Henry and the aforementioned Bloomer have ever finished as the top flight's top scorer on more occasions than Lineker in the last 130 years of English league football.

Hailing from ​Leicester, Lineker spent his youth playing football with younger brother Wayne and helping out his greengrocer father on a 'fruit and veg' stall in the city's historic market.

Although clearly an intelligent and erudite individual, as his media work and other non-football interests can attest, he left school with relatively modest academic achievements to his name - just four 'O-levels'. Lineker even remarked in 2010, "My last report said something along the lines of: 'He concentrates far too much on football. He'll never make a living at that'."

In that same interview, he actually admitted he thought his best chance at being a professional sportsman lay in cricket rather than football. Fortunately, for football's sake, and proving his old teacher wrong, Lineker got his break when he joined his home-town team upon finishing his education and signed his first professional contract in 1978.

As Leicester bounced between the top flight and the second tier, Lineker found his goalscoring feet in the Second Division in the 1980/81 season. As a 21-year-old, he netted 17 times in the league, following that up with 26 the season after to help the Foxes to promotion. Building on the momentum, the striker scored 22 in the First Division in 1983/84 and improved to 24 in 1984/85.

His form caught the attention of champions Everton and he moved north to Merseyside for a substantial fee of £800,000 in the summer of 1985. As a platform for the 1986 World Cup the following year, that season with the Toffees could not have gone better. Lineker scored 30 league goals, the only time in his career he would reach that milestone, and 38 in all competitions. He also collected the prestigious PFA and FWA Player of the Year awards.

As far as the World Cup was concerned, Lineker was new to the England team, arriving in the squad part way through the four-year cycle. His first goal came in a 1985 friendly against Republic of Ireland and the only goals he contributed during qualifying were as part of a hat-trick against Turkey in the penultimate game. Yet his club form for ​Everton ensured he was as good as any striker in the world ahead of the finals in Mexico, having significantly outscored the likes of Karl-Heinz Rummenigge, Paolo Rossi, Jorge Vadano and Everton teammate Graeme Sharp during the season.

Gary Lineker during his one season at Everton, 1985/1986. pic.twitter.com/3oDKZWsEw8

At the start of 1986 World Cup, Lineker had only played 13 international games and both he and England started rather slowly, losing their opener to Portugal, who were at their first World Cup since 1966 and the days of Eusebio, and drawing 0-0 with Morocco - who were similarly ending a substantial drought after last qualifying in 1970. But the third game against a Poland side that had finished third at the previous tournament in 1982, yielded Lineker's first World Cup goals and the second international hat-trick of his career.

Unlike, individuals like Diego Maradona, who emerged as the best player on the planet in Mexico that summer, Lineker was not naturally gifted with flawless technique. But what he had was a great intelligence and a genuine knack for getting into the right place at the right time.

His hat-trick against Poland, a game England won 3-0, highlighted that perfectly. All three of his goals came in or around the six yard box. The first two were first time finishes after low crosses into the penalty area from teammates, while the third required two touches, one to control and a second to score, after the Polish goalkeeper had spilled an English corner. 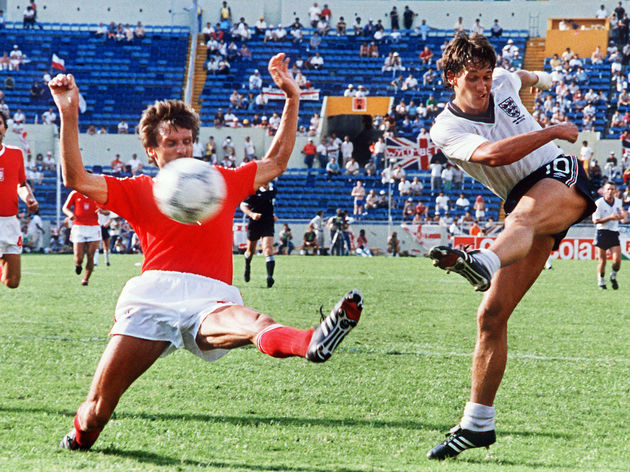 And so he continued in that vein, the ultimate poacher. England met Paraguay in the Round of 16, with Lineker opening the scoring after half an hour with a close range tap in. After Peter Beardsley had doubled England's lead, Lineker sealed the result with another first time shot from the edge of the six-yard box with just under 20 minutes left to play. By this point, he had scored five World Cup goals, none from more than six or seven yards out, and most with a single touch.

England would meet Argentina at the quarter final stage, a game that has come to be remembered for two iconic and deeply contrasting goals from Maradona in the space of four second half minutes. Argentina won the game en-route to eventually lifting the trophy, but Linekar netted what proved to be a consolation for England in the final 10 minutes. This time it was with his head, but again it was a six-yard box poacher's goal. He was just so good at it.

England exited the World Cup, but no one would score more than Lineker's six goals. Maradona finished with five, as did Brazil's Careca, and a young Emilio Butragueno from Spain. The Golden Boot belonged to Lineker, the first and still only English player to finish as top scorer at the World Cup.

ON THIS DAY: In 1986, Gary Lineker scored a hat-trick vs Poland - going on to grab the tournament's Golden Boot. pic.twitter.com/RfvGdOuxuu

Lineker's exploits in Mexico, combined with his 38-goal season for Everton, saw ​Barcelona pay big money to take him to Spain immediately after the World Cup. The fee meant that Everton pocketed a tidy £2m profit, while Lineker linked up with fellow Englishman Terry Venables at Camp Nou.

He enjoyed a strong first season, finding the net 21 times and finishing as the club's top scorer. He scored another 20 in his second year, again as top scorer, when Venables was replaced as coach by Luis Aragones, and won the Copa del Rey. The arrival of Johan Cruyff as coach in 1988 eventually resulted in Lineker often playing out of position.

The striker returned home to England in 1989 to join ​Tottenham, where he was immediately back among the goals. He enjoyed a strong World Cup in 1990 as England improved on 1986 and went within a penalty shootout of the final. And although he couldn't retain the Golden Boot title, Lineker scored four times at the tournament to take his overall World Cup tally to 10 - only seven other players in have ever scored more, including legends such as Pele, Ronaldo, Gerd Muller and Just Fontaine.

Lineker's England career came to an end in 1992 after a disappointing European ​Championship in Sweden. With 48 international goals to his name, he was just one behind Sir Bobby Charlton's then national team record, but was substituted in his last ever game for his country.

As far as the World Cup is concerned, Lineker's star never burned brighter than that incredible Mexican summer of 1986.