​Ilkay Gundogan reportedly wants to sit down with ​Manchester City and discuss extending his stay with the Premier League champions.

The midfielder, who has returned to be an integral part of the squad after a season marred by injury troubles last time out, has two years left on his deal at the Etihad Stadium but wants to commit his long-term future to the club, according to the ​Sun.

A source close to Gundogan's camp has claimed that both City and the Germany international see no issue with remaining in Manchester and, with manager Pep Guardiola apparently being happy with the contribution Gundogan has made, it seems almost certain that the 27-year-old will pen a new contract sooner rather than later. 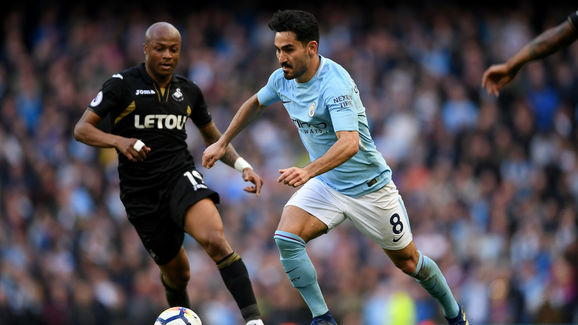 The source said: "Nobody at the club can see it being a problem at all. Ilkay loves living in the centre of Manchester and is really content, both on and off the pitch.

"He's reaching his peak years and knows City is the place to be in the next few seasons. This is especially true with Pep who really appreciates what he brings to the team with his quality."

Gundogan is reported to earn around £85,000-a-week but may look to ask for a pay rise due to his displays for the ​Premier League leaders this term.

Ilkay Gündogan's ball retention and general ability proves to be a vital piece to our jigsaw when he plays. I'd get him signed up on a new contract as soon as possible.

(You may also be interested in ​Dates to Remember: When Every Man City Player's Contract is Due to Expire)

The box-to-box midfield star has bagged six goals and seven assists in 45 outings in all competitions during the current campaign to help City secure the league title and the Carabao Cup.

His number of appearances are four times up on last season's figure when a cruciate knee ligament injury restricted him to only 15 run outs for Guardiola's side, but Gundogan will hope he has done more than enough to stick around past his contract's June 2020 expiry date.

Guardiola is said to be on the lookout for midfield reinforcements in the summer but Gundogan will still look to remain part of the first team picture and, with the backing of the club's fanbase, should have no reason to worry about his future.