After Manchester United booked their place in next month's Emirates FA Cup final against Chelsea at Wembley, the Red Devils switch their attentions back to the Premier League this weekend and cementing a top-two spot, as they host Arsenal at Old Trafford on Sunday. With United having circled their own date on the calendar for May, the Gunners too come into this latest outing against former fierce rivals just days after part one of the their UEFA Europa League semi-final versus ​Atletico Madrid, eyeing a date in Lyon on May 16th.

The hosts have the far superior record against their visitors, but this game represents a far greater and more historical landmark with this being his 58th and final time Arsene Wenger will lock horns with United and Jose Mourinho from the ​Arsenal dugout, following the announcement of his imminent departure last week.

Here is all you need to know ahead of Sunday's meeting in Manchester. The mere mention of the words 'Manchester United', 'versus' and 'Arsenal' are enough to conjure up memories of many a classic encounter, but for this particular one we go back to February 2005, as the Red Devils came out on top 4-2 in north London.

In what was Arsenal's final meeting with the old rival at Highbury - seeking revenge for their opponents ending their 49-match unbeaten streak earlier that season - Patrick Vieira gave the hosts an eighth minute lead, before an Ashley Cole own-goal sparked an eventual United comeback.

Dennis Bergkamp restored the advantage into the break, before the bane of many a team Cristiano Ronaldo notched a brace inside four second half minutes to give Sir Alex Ferguson's men a slender lead.

As the Gunners sought a leveler in the closing stages, John O'Shea's 89th-minute goal sealed the win, as United won out 4-2 winners and went a long to preventing Arsenal retaining their ​Premier League crown as ​Chelsea stood atop the English top-flight summit that season. 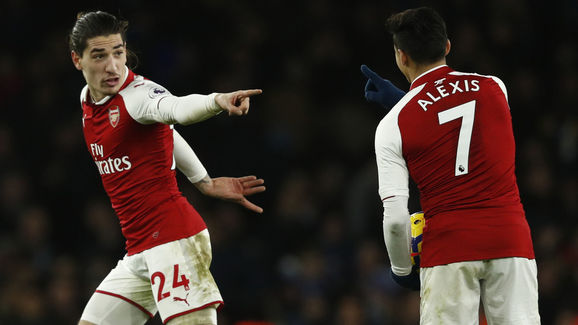 As former team-mates and one of the only remaining bonds of Alexis Sanchez's increasingly fractured relationships of the final weeks of his time at Arsenal, Hector Bellerin will for the first time go up against his former Chilean colleague, a battle which could go a long way in deciding Sunday's outcome.

With the Spaniard on European duty from Thursday night, there is the chance Bellerin will be rested but he has been a regular at right-back even after Arsenal's midweek sojourns this season, let alone the fact that this is Wenger's Old Trafford swansong and will want to name a strong XI.

In recent weeks, Sanchez has began to slot into his new role for United with aplomb but will know he will be closely guarded by his old employers on the left flank.

Bellerin has not had the most memorable of seasons following his last two breakout season in north London but may be one of the only Premier League full-backs that could out-pace the fiery Chilean on the wing.

The quandary for Bellerin will be to reel in his electric dashed down the United left, keeping Sanchez as his bedfellow for the majority of the 90 minutes at Old Trafford. Playing a reserved role for the former ​Barcelona academy graduate has been a issue particularly this season but for Arsenal to give Wenger a fitting send off in Manchester, the defender will need to do so.

​Manchester United's only first-team doubt for the weekend is skipper and full-back Antonio Valencia with a calf injury, but the Ecuadorian is expected to play this weekend. Goalkeeper Sergio Romero however, is out with a knee problem.

After a string of improved performances, Paul Pogba is set to keep his place in midfield, but Mourinho will have a decision to make over whether to start Marcus Rashford who has a habit of scoring against the Gunners in recent seasons.

As documented, Wenger may elect to name a modified side from that that drew 1-1 against Los Coloncheros on Thursday night - despite this being a top-six clash. 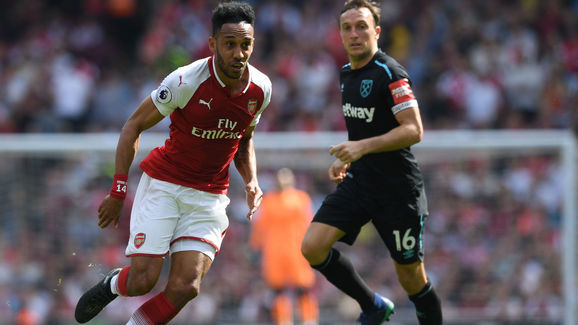 Pierre-Emerick Aubameyang will likely come into the starting XI either on the left-wing or in place of Alexandre Lacazette up front, with Aaron Ramsey, Mesut Ozil and Jack Wilshere all questionable starters.

Arsenal will be without midfielder Mohamed Elneny due to and ankle injury, however the Egyptian is expected to make a swift recovery - possibly in time for the Gunners away trip to ​Huddersfield Town on the final day of the season.

Henrikh Mkhitaryan is again a major doubt with a knee ligament injury, whilst a date for Santi Cazorla's return to action remains unknown. Much will depend on what sort of lineup Wenger names; a decision that could shape this game.

However, with United having had a week off to prepare for this one, there is a feeling United will have too much for their visitors here.

Sanchez could indeed be the 'X' factor this weekend, and it will be interest to note what sort of reaction he gives should he find the net.

The romantics would possibly have Arsenal win and have the curtain fall on what has been a labour of love - and indeed much woe in recent years - for Wenger in Manchester for over 20 years. Mourinho however, is not one for handing out happy endings.

Nor are his teams especially when the north Londoners roll into town. There may be no fairytale ending for Wenger at Old Trafford.