​Alexis Sanchez has stoked the fires ahead of a reunion with Arsenal this weekend by stating that ​Manchester United have 'more history' than his former club.

The forward will face the Gunners for the first time since his January transfer to Old Trafford on Sunday, and there is sure to be a hostile atmosphere that will greet Sanchez from the travelling ​Arsenal fans.

Speaking to ​MUTV ahead of the bout, however, the 29-year-old fired a barb at his old side over their lack of silverware and admitted that things were much different with United than they were under Arsene Wenger. 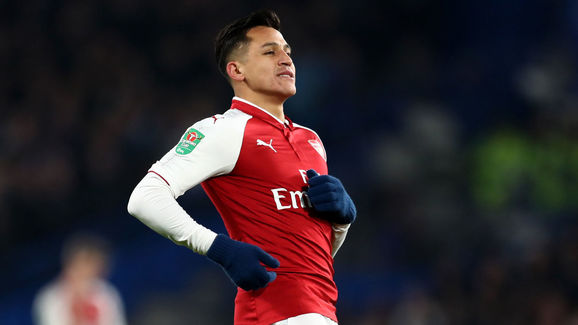 He said: "It is very different here. I think United is a club with more history and we want to win trophies next year.

"We need to keep progressing; United is a big club, to which I am still adapting, and I am looking forward to giving everything I've got next year and aiming to win everything there is to win."

Sanchez's futures in north London was a hot topic for many months as the ex-contract rebel continued to drag his heels over penning fresh terms with Arsenal. The Chile international only had six months to run on his contract at the Emirates before United came calling and Arsenal allowed him to leave in a swap deal involving Henrikh Mkhitaryan on transfer deadline day.

Sanchez has struggled to showcase his best form in a United shirt during his first three months with them but bagged the equaliser in the FA Cup semi final victory over ​Tottenham last Saturday.

Little god of Manchester. Score against them Arsenal #fearless

It was yet another goal for Sanchez at national stadium Wembley and he added that he wanted to fire in more goals for United at the hallowed ground - starting with the cup final against ​Chelsea next month.

Sanchez said: "The truth is that I score every time I play at Wembley! I have won several trophies there with my national team and with Arsenal. With Chile, I also scored two goals and that means a lot to me. Wembley brings me good luck.

"We are very happy to have reached the final. I think Saturday's match was the most perfect one since I joined United, and that makes me very happy for what lies ahead."