​Arsenal defender Hector Bellerin has responded angrily to reports of him and Alexandre Lacazette having a training ground bust up.

​The Daily Mail published a story reporting that the pair had squared up to each other in a heated row during training on Wednesday following an aerial challenge between the pair.

Pictures of the 'row' were included in the story and to the naked eye it could have been seen as a bust up, but Bellerin himself was quick to respond to the story and hit back at the news publication.

​​The Spanish full back was clearly not a fan of the article published by the Daily Mail and for someone who is usually fairly lighthearted on the platform, Bellerin seemed very serious.

The last thing ​Arsenal will want is tempers fraying before what is arguably their biggest game of the season on Thursday.

The North London club host ​Atletico Madrid in the first leg of their Europa League semi final with the Spanish side and winning the competition will be their only chance of playing Champions League football next season. 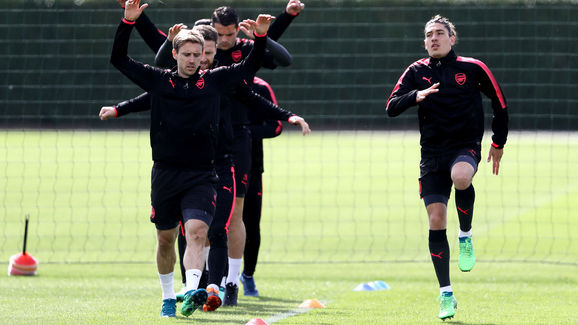 There is also the added pressure of giving Arsene Wenger the send of he deserves by providing him with some sort of European success, an accolade that has eluded him during his time at the Emirates.

Despite reaching the UEFA Cup final in 2000 and the Champions League final in 2006, Wenger has not brought a European trophy back to the Emirates, and after ​revealing his impending resignation at the end of the season, this will be his last chance to do so.