​Barcelona are looking at the possibility of signing ​Chelsea's Marcos Alonso, with the Spaniard being viewed as a potential long term replacement for the ageing Gerard Pique.

Although 31-year-old Pique has made 41 club appearances this season and is still an integral figure (on and off the field) at Camp Nou, the club are looking at succession planning for their older stars following the recent departure of Javier Mascherano and ​imminent one of Andres Iniesta.

27-year-old Alonso is a natural wing back as opposed to Pique's position of centre back, but according to ​Goal, that is merely semantics to Barça, who see the former ​Sunderland man being able to operate in a deeper, more defensive role. 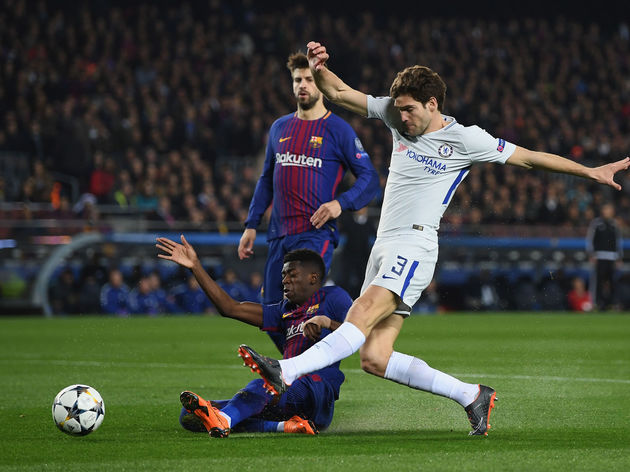 Alonso, who has recently won his first Spain cap, has garnered attention for his displays this season in which he has registered six ​Premier League goals.

The set piece specialist does have some previous at centre back during his time at Fiorentina, while Barcelona have history of using players out of their more associated position -

However, in addition to questions over Alonso's positional sense, the move might be a curious one due to Alonso's past with Barcelona's biggest rivals ​Real Madrid, where he came through as an academy player.

We are in the final! Well done boys! #wembley #facup @ChelseaFC ⚽️ pic.twitter.com/hfcDXHgR4y

His solitary career appearance in ​La Liga to date came in the dying moments as he came on as a substitute for Los Blancos beat Racing Santander back in 2010. Were Alonso to make the move to Camp Nou, he would be the first player to play for both Clasico sides since Samuel Eto'o.

However, notably the PFA Team of the Year member does have Barça blood as well and his father made over 100 appearances for the Catalan giants in the 1980s.

​Barcelona have been rumoured to be in the market for a new centre back for some time - with the search apparently expedited by the ongoing uncertainty over the future of Samuel Umititi.

Other perhaps ​more likely names in the frame are Sevilla's Clement Lenglet, who is five years younger than Alonso and a natural centre back, as well as RB Leipzig's Dayot Upamecano, who has a reported release clause of €100m.