​The Primera Division leaders went in as the heavy favourites, having nearly wrapped up the league title. They had also beaten Sevilla in six of their last seven finals in all competitions. 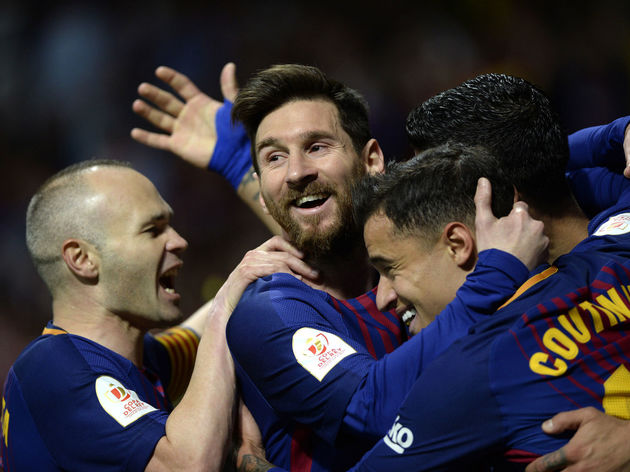 Vincenzo Montella, meanwhile, was looking for his first major trophy as a coach. And he knew he was in for the biggest challenge of his managerial career.

It wasn't long before La Blaugrana took the lead, however, going ahead in the 14th minute through a superb 60-yard punt from ​Barca keeper Jasper Cillessen that fell to Philippe Coutinho. The Brazilian played a pass across the goal to find Luis Suarez for an easy finish. Sevilla tried getting in a response moments later, but Joaquin Correa failed to connect properly after attempting to volley Franco Vazquez's pass goalwards and made a complete mess of things.

The Catalan side would punish that error in the 30th minute, doubling their lead after a bit of magic from Jordi Alba, who played a cheeky one-two sequence with Andres Iniesta before hitting a backheeled pass to Lionel Messi from the byline. The diminutive No. 10 finished with aplomb, striking with his left foot to hand Barca a 2-0 advantage. The lead turned into 3-0 ten minutes later, with Messi threading a sublime through ball for Suarez to run onto. The former ​Liverpool striker only needed one touch to sort things out, shooting low past the keeper with an accurate strike and opening up a seemingly insurmountable lead to head into halftime with.

Barcelona extended their lead even further early in the second half, getting another goal to take the scoreline to 4-0 through a sensational strike from Iniesta on minute 53.

The Spaniard, possibly playing in his last final for the Camp Nou side, was found by Messi in the box with a great leading pass which he lightly touched past the keeper before scoring from quite a tight angle.

By then, the game was out of Sevilla's reach, but Barca continued pressing in search of more goals. And score again they did, as Coutinho got in on the act with a penalty after actually scoring but being ordered to take a spot kick instead as the whistle had already gone before the ball hit the back of the net.

Montella's side would hardly get a chance to even maintain prolonged possession of the ball as the Primera Division champions elect kept piling on the pressure. Iniesta was taken off with two minutes of the 90 to go, receiving an effusive ovation from both sets of supporters, effectively signalling that the end of his illustrious Barcelona career was near.

There would be no stoppage time, with the officials putting Sevilla out of their misery at the soonest, leaving Barca waiting to lift the Copa del Rey trophy for the fourth successive season and the 30th time overall.