​Arsene Wenger has confirmed that Aaron Ramsey will be fit to face West Ham United this weekend - but contract rebel Jack Wilshere is a major doubt with an ankle injury.

The veteran Arsenal manager, who on Friday announced that he will bring an end to his 22-year reign with the Gunners at the season's end, spoke to the press (h/t ​football.london) about who would be available for his side's meeting with the Hammers at the Emirates on Sunday.

Ramsey had sustained a cut on his leg in training ahead of the contest, while Wilshere was nursing the knock he picked up earlier in the week. 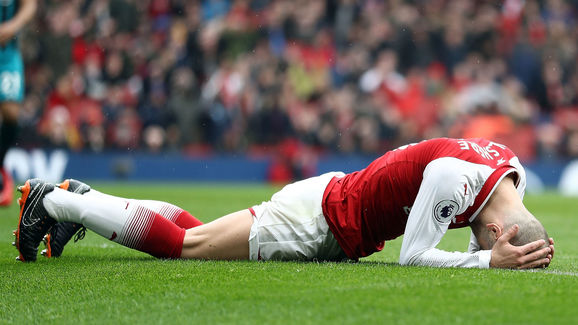 And Wenger admitted that it was contrasting news for his midfield duo ahead of the clash with David Moyes' relegation-threatened team in north London.

Wenger said: "Well we have some uncertainties about Wilshere. It’s a short-term one, a little ankle problem. Of course (Henrikh) Mkhitaryan is not back. (David) Ospina is available again of course and that’s basically it I think.

"He (Ramsey) has not participated in full training but he’s practicing in non-contact, so he will be available for Sunday."

Mkhitaryan has been sidelined for a month with a knee problem he sustained in the 3-0 win over Stoke, but Wenger revealed that the winger could be available for selection in the very near future after he stepped up his recovery this week.

He continued: "Mkhitaryan is running again. He has to progress in the next three or four days to see how much intensity he can have in his training sessions. Possibly Thursday (Atletico Madrid) is the earliest I think."

With that contest against one of La Liga's toughest opponents to come next Thursday, Wenger may be expected to rest some of his best players to face Diego Simeone's men.

But the 67-year-old refused to speculate on who, if anyone, would sit out on Sunday ahead of the clash.

He said: "No, I would say this weekend is as well a preparation for Thursday. I rested some players after the Moscow game, and they will need a game. It’s not so much rest, it’s more preparation."