Brighton 1-1 Tottenham: All Square at the Amex After Gross Penalty Cancels Out Kane Opener

​It was honours even at the Amex Stadium as Brighton and ​Tottenham played out a 1-1 draw, with the hosts moving a precious point closer to definite ​Premier League safety.

After a tense first half, Harry Kane opened the scoring for the visitors just almost immediately after the restart, before a Pascal Gross penalty two minutes later meant the Seagulls had something to show at full time for a valiant defensive performance.

In a tight opening 45 minutes, as Spurs saw more of the ball throughout the half, with Brighton looking to threaten on the counter attack. 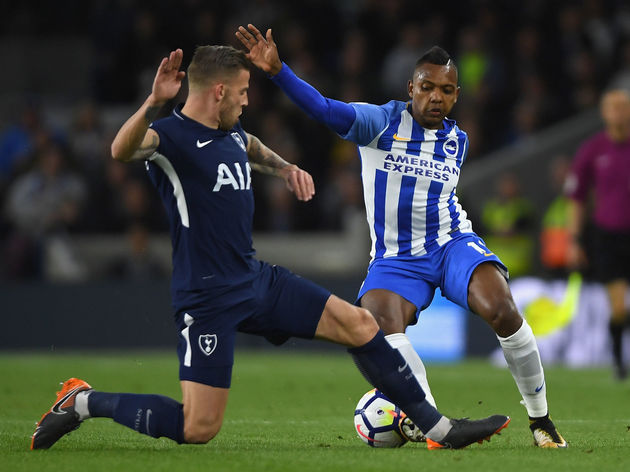 Both sides tested their opposition's goalkeeper with efforts from distance throughout the half. The best of the half first came as Anthony Knockaert's strike took a deflection of Ben Davies, which looked to have Hugo Lloris worried briefly before gathering, while Matt Ryan at the other end had to be alert to tip Lucas Moura's long-range drive.

Spurs wasted a pair of free kicks on the edge of the area at the beginning and end of the half, before Mauricio Pochettino's side almost entered half time with the lead. Harry Kane did well to lay the ball into the path of Heung-Min Son, before the South Korean brought the best out the Ryan, diving quickly low to his left to keep the scoreline level at the interval.

HALF-TIME: Nothing to separate the sides at the break after an evenly-matched first half at the Amex Stadium. #COYS pic.twitter.com/Nxhxz21OtP

For as well as Chris Hughton's side did in the first half to deny Spurs, it took three second half minutes before the North London side took the lead, courtesy of Kane's 26th league goal of the season.

Gaeton Bong lost possession cheaply to Victor Wanyama, before Son did brilliantly to keep the ball in play and away from an advancing Ryan, laying the ball to Kane who fired home despite the best efforts of Bruno on the line.

Harry Kane’s goal v Brighton means that he has scored against 26 of the 27 teams he has faced in the PL (Cardiff the only team that he’s not scored against) #PL pic.twitter.com/WBMBrNtsff

No sooner were Spurs in front, ​Brighton found themselves level via the penalty spot. Jose Izquierdo appeared to be tripped by Serge Aurier in the area, leaving Kevin Friend no choice but to point to the spot. Gross took responsibility and found Lloris' bottom right corner to level the game a mere two minutes after Kane's opener.

Following the frantic opening five minutes, Spurs dominated possession throughout the second period but couldn't break down their spirited hosts. The closest Pochettino's side came was when Shane Duffy almost poked the ball into his own net from a Christian Eriksen cross, while Erik Lamela fired straight at Ryan after a promising run,

Ultimately however, Spurs couldn't find a way past a resolute Brighton defence, meaning both sides left the Amex Stadium with a share of the points.

 Here's how Albion line up for tonight's @premierleague game against @SpursOfficial at the Amex Stadium. #BHATOT