La Liga leaders Barcelona were handed quite the shocking loss at the Stadio Olimpico on Tuesday night, bowing out to Roma, who gave absolutely everything to overturn a 4-1 deficit to advance to the Champions League semi-final.

The Spanish side took a 4-1 aggregate lead into the tie, leaving Roma with lots to do. But they definitely looked up to the task in the early going.

Edin Dzeko kicked things off rather early, scoring the opener in the sixth minute after chasing down a dink over the Barca defence to poke home past the onrushing keeper from around eight yards out. There would be other chances for the Italian outfit, with Dzeko trying to capitalise on his side's pressing after receiving a ball from Patrik Schick after it was nicked off Andres Iniesta. The Bosnian tried working a shot from the edge of the area but was crowded out.

Radja Nainggolan also had a pop from 25 yards out following a pass from Dzeko yet shot wide.

An unmarked Schick was handed an opportunity of his own, just eight yards from goal, off Federico Fazio's cross. Yet despite rising to head powerfully, he directed off the mark.

Roma headed into halftime one goal to the good but with plenty of work to do. The signs from the first half, though, were quite positive, as they did a good job of pressuring the visitors and carving several chances out for themselves. 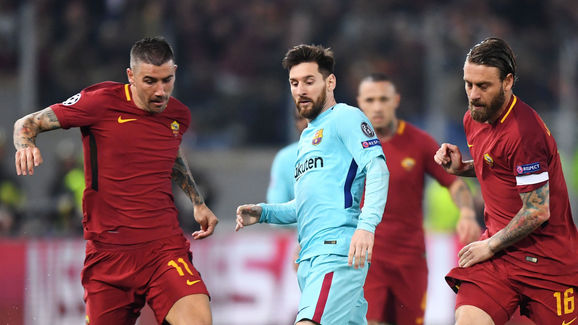 The Catalan side did well to keep the ball in the opening minutes of the second period but still struggled to get out of their half as Roma kept pressing and exposing their frailties in terms of physicality.

Roma's dominance would pay off again as Dzeko, who had been brilliant all night, was brought down in the box by Gerard Pique. The ref initially dismissed the calls but decided to award a spot-kick after a conversation with his assistant.

Daniele de Rossi stepped up to bury from the penalty spot, giving his side a 2-0 lead on 58 minutes and taking them to within one goal of progression.

The Italian nearly went one better - ten minutes later - with what could have been the potential decider, but headed wide from just six yards out after rising to meet a cross.

With Barca struggling to hold on, Kostas Manolas emerged the man of the hour, getting the third for Roma with a glancing header off of a corner in the 83rd minute. As things stood, Roma were actually headed to the semis, given what now counted as a precious away goal in their possession.

Liverpool in the Champions League semi finals meanwhile Barcelona are getting knocked out by Roma. pic.twitter.com/KaU0uqy7um

It was now Roma's turn to hold on, with a rattled Barca even resorting to long balls. Lionel Messi and Luis Suarez both had late chances, while Ousmane Dembele missed the chance of his life after Becker rushed off his line. The Frenchman's looping shot from 30 yards out dropped just over the bar, leaving the home fans with hearts in mouth.

The home side were able to keep the scoreline as it was, possibly playing the game of the season, as well as the comeback, stunning Ernesto Valverde's men and all of Spain as they marched through to the next round as possible favourites after their resounding display.