Liverpool advanced to their first Champions League semi final in 10 years after defeating Manchester City 2-1 at the Etihad Stadium for a 5-1 aggregate win on Tuesday night, thanks to second half goals from Mohamed Salah and Roberto Firmino.

The result is somewhat flattering for Jürgen Klopp's side, who were overrun by City in the first half and fortunate not to trail by more than 1-0 at half time, but the Reds exposed the hosts' defensive frailties in the second half to take an in the end deserved place in the last four. Before the game, Pep Guardiola said that his side would need to play a "perfect game" to overturn their 3-0 deficit from the first leg.

They certainly made a perfect start, with Raheem Sterling teeing up Gabriel Jesus for a simple finish in the second minute, after an uncharacteristically poor clearance by Virgil van Dijk from the left. The Liverpool centre back compounded his error by appealing for a non-existent foul.

It seemed to vindicate Guardiola's selection, which looked audacious even by his standards, with Sterling, Jesus and Leroy Sané forming the front three in a 3-4-3 formation.

Liverpool looked stunned and never really seemed to get going in a first half completely dominated by Manchester City.

The pressure seemed to be getting to the Reds, with Sadio Mané picking up a yellow card for a late challenge on Nicolas Otamendi, and Trent Alexander-Arnold and Roberto Firmino also booked for cynical fouls.

Van Dijk partially atoned for his early error with a series of towering defensive headers, but the Reds looked bamboozled by City's guile and industry. Almost every time the Reds gained possession, City swiftly won the ball back.

32. it's been a stunning performance so far! Every ball challenged, no tackle shirked, every opponent chased-down. Amazing!

The only consolation for Liverpool was that - for all City's possession, pressure and dangerous crosses - the home side failed to create many clear goalscoring opportunities.

Nevertheless, City full back Bernardo Silva was desperately unlucky to see his brilliant curling effort from outside the box rebound off the post.

City were even more unfortunate when Leroy Sané netted from close range after a dismal error by Liverpool goalkeeper Loris Karius - only to be incorrectly ruled offside. Guardiola was so incensed by the decision that he was sent to the stands at half time for protesting too vociferously. 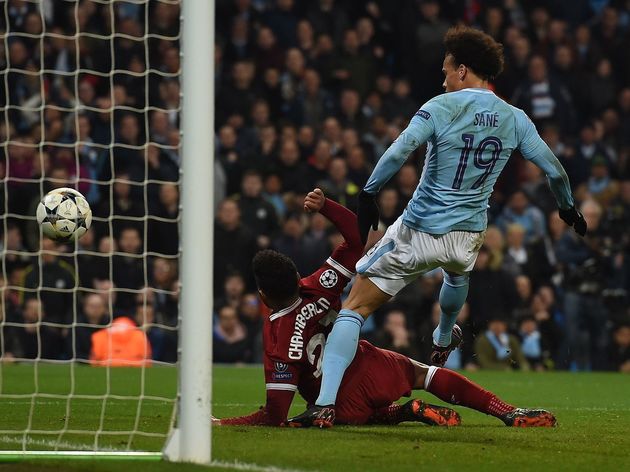 Despite being outplayed, Liverpool had half a chance to equalise in the final minute of the first half, with Alex Oxlade-Chamberlain missing from a narrow angle after combining well with the Mohamed Salah.

The Egyptian had been largely anonymous until then - but he took his side a giant leap closer to the semi final with a deft chip in the 56th minute, after City keeper Ederson had saved from Sadio Mané.

It was the very definition of a "smash-and-grab" by Liverpool, and what had already been a monumental challenge for the Premier League champions-elect now looked nigh on impossible. City seemed to lose their earlier intensity, and in the 66th minute David Silva gave way to striker Sergio Agüero, as Guardiola sought to re-energise his side.

Sané did put the ball in the net again for City, but again the goal was ruled out for offside. This time, the decision appeared to be correct, albeit marginally.

Even if the goal had stood, it would surely have been too little, too late for City.

It's Liverpool who advance to the last four. And they'll be in the pot on Friday alongside AS Roma, who incredibly dumped Barcelona out of the Champions League with a 3-0 home win.