​Leicester City are interested in bolstering their goalkeeping ranks with a swoop for Zorya Luhansk's Andriy Lunin.

That is according to the player's agent, Irakli Khvedeliani, who was quoted by Italian news outlet ​Calciomercato as he claimed that the likes of the Foxes and ​Serie A club Inter wanted to lure his client away from the Ukrainian top flight.

Lunin has been Luhansk's first choice shot stopper this season after he cemented his place in the starting lineup, and his performances have alerted a few European clubs to his talents. 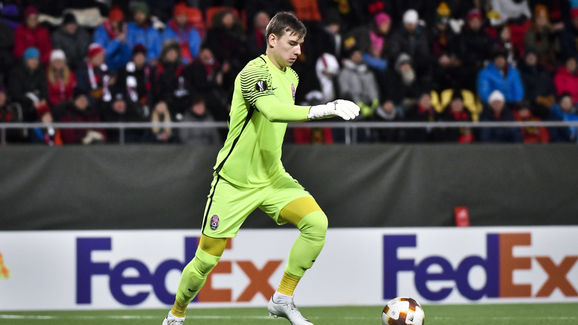 The 19-year-old, who is also thought to be interesting Austrian RB Salzburg, would not likely come cheap for whoever manages to convince him to leave his homeland.

And Khvedeliani commented on those rumours, revealing that there could be a bidding way for Lunin's services if all parties decided to make moves for him.

He said: "There are several clubs keeping close tracks of Lunin. I think there is also interest from Austria's RB Salzburg. ​Inter and Leicester are keeping tabs on the player.

"I do not know about the interests of ​Napoli and AS Roma, but I can not exclude contacts with the club."

The next big thing? pic.twitter.com/x3HY9JPk6t

Lunin only joined Luhansk from former club Dnipro in the summer for an undisclosed fee, and has been the undisputed number one for his club throughout the 2017/18 campaign.

He has managed to keep nine clean sheets from the matches he has featured in - form that has helped Zorya up to fourth in the Ukrainian ​Premier League standings.

​Leicester are in need of fresh blood in their goalkeeping ranks at the King Power Stadium, with none of their senior keepers under the age of 30. Kasper Schmeichel is 31 years of age and, with his understudies Ben Hamer and Eldin Jakupovic aged 30 and 33 respectively, manager Claude Puel would do well to find a youngster who could potentially replace them in goal in the next few seasons.

Inter are in a similar boat, with none of their shot stopper under 32-years-old, and Luciano Spalletti