​Leicester City boss Claude Puel has admitted that their Spanish midfielder Vicente Iborra is likely to miss the rest of the season, after collecting a hamstring injury in the ​2-1 loss at home to Newcastle United.

Going into Saturday's encounter, the Foxes were already facing a personnel crisis in the centre of midfield, with Wilfred Ndidi suspended and both Daniel Amartey and Matty James (who is out for the season) absent through injury.

And, speaking to TalkSport after the defeat, as quoted by the ​Leicester Mercury, Puel revealed the probable extent of Iborra's ailment: “I think perhaps we lost Iborra until the end of the season. 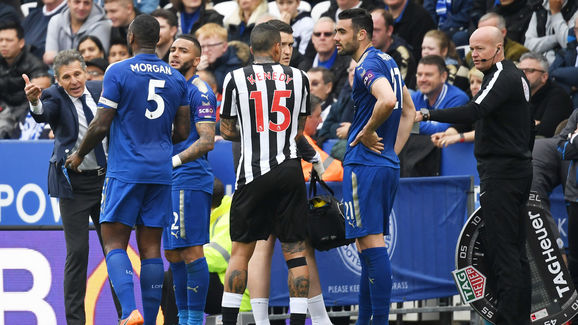 “Iborra has a hamstring injury and we have to see. He will be examined and undergo tests

tomorrow but we are unlucky at this end of the season with our midfielders. After the surgery for Matty James, the sending off which wasn’t deserved for Ndidi it is now Iborra."

However, despite the despairing loss of both the game and their veteran midfield enforcer, the Frenchman admitted the performance of Iborra's replacement, Hamza Choudhury, was a silver lining.

The 56 year old declared: “It is a good thing now to have a young player like Choudhury. I think he is perhaps the only satisfaction from the game today because he came into the game with good quality, aggressiveness and tempo.

“He worked very hard and cut out a lot of dangerous balls for us because we pushed a lot in the second half. It was a good performance.”

The precocious 20-year-old is currently the captain of the club's Under-23's side, and could be in line for his full first team debut away at Burnley next week.