On-loan Newcastle goalkeeper Martin Dúbravka has revealed his desire to stay at St James' Park beyond the summer.

In January, the 29-year-old Sparta Prague goalkeeper ​joined the Magpies on loan until the end of the season and could make his move permanent if Newcastle activate their £4.2m option to buy.

Martin Dubravka says he is keen to stay at Newcastle beyond the end of the season after impressing during his loan spell from Sparta Prague: https://t.co/PYWHTVr8gd pic.twitter.com/BtGE9noDWm

The Slovakia international has kept three clean sheets in his first five Newcastle appearances, including a 1-0 victory against Manchester United on his debut.

"I don't like to say we have one or two more games to stay in the league and be safe. Everybody knows that we are not in the best situation and need to fight for it.

"I want to stay here after the summer, so I need to be focused, but I don't think this is the time to speak about it. 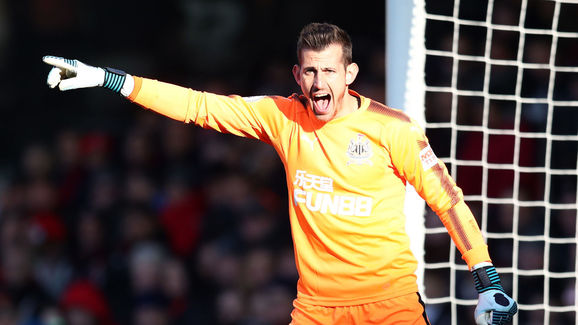 "I've enjoyed every game we've played. I knew when I came here that we were not in the best situation, but Newcastle's a huge club with a great history and deserves to stay in the league.

"Since I signed a loan deal here, we've worked hard  to take this attitude from the training ground to the pitch in games.

"Everybody fights for it. It was important that we bring this energy from the training ground."

His words will be music to the ears of Newcastle staff and fans, following a recent claim from the ​Daily Mail that four other clubs, including Udinese, are interested in the goalkeeper.