Christian Eriksen's thunderbolt on the stroke of half-time cancelled out Alvaro Morata's opener, and Dele Alli's quick-fire double midway through the second half took the game away from the hosts.

Down the other end, Christian Eriksen floated a ball into the box only for Dele Alli to glance wide. The Englishman scored twice with his head in Spurs' 2-0 win over their London rivals last season. The pressure paid for Chelsea, with Alvaro Morata scoring his second in two games from a Victor Moses cross to give his team a vital first-half lead. ​All the pre-match talk had been about ​Tottenham's talisman, with Harry Kane recovering from ​his ankle injury against Bournemouth to be named on the bench for the game at Stamford Bridge. However, it was Chelsea's number nine who struck the first blow, with Morata rising highest to head into an empty net after half an hour for his first Premier League goal since Boxing Day. What a hit by Eriksen!!!!!! Tottenham had nothing going all half !!! Chelsea regretting the missed chances 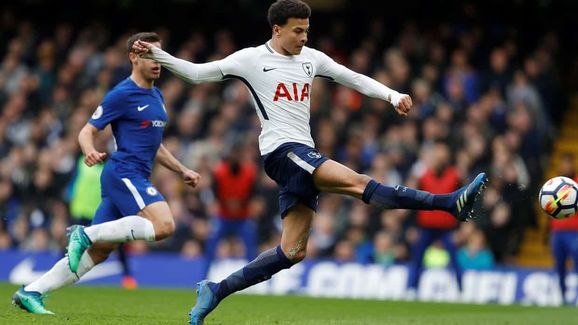 The hosts threatened late on, but Tottenham held firm to win the derby for a first win at their London rivals since February 1990, long before the Premier League began. The three points took Spurs just two points behind Liverpool in third with a game in hand to come.

Meanwhile, a fourth home defeat of the season has all but finished Chelsea's top-four hopes, lying eight points behind the Lilywhites in fifth with just seven games to go.

Antonio Conte's attentions must turn to their upcoming FA Cup semi-final against Southampton, as the Italian looks to salvage silverware from what has to be seen as a poor defence of their title, with a managerial change at Stamford Bridge looking inevitable in the summer.

What are your thoughts? #CHETOT pic.twitter.com/XRYeV6ebYH