​Arsenal may be set to lose out in the race to land Thomas Tuchel to European rivals Paris Saint-Germain or Chelsea.

The Gunners were thought to have tied up a deal to bring the German in as Arsene Wenger's long-term replacement in the dugout, but Sport Bild has alleged that PSG or their London rivals Chelsea have now gazzumped them in the battle to acquire his services.

The report claims that Tuchel's camp has been in talks at Stamford Bridge and Parc de Princes about taking up the reins of the Blues or Les Parisiens when the duo dispense with Antonio Conte and Unai Emery respectively this summer.

And those negotiations have pushed ​Arsenal down to third in the queue for the ex-​Borussia Dortmund manager, who is not thought to have chatted to Arsenal's hierarchy about taking over at the Emirates.

German newspaper Kicker ​had reported that Tuchel had declined to speak to ​Bundesliga heavyweights ​Bayern Munich over their vacant managerial post as he had 'signed' a deal to replace Wenger when this term ends.

But that claim is now being disputed by other outlets on the continent as speculation continues over where Tuchel's future lies after a season out of the game.

German journalist Raphael Honigstein has suggested that talks between Tuchel and ​Chelsea's director Marina Granovskaia went well as the reigning champions eye a new boss as Conte heads towards the exit door.

The Italian, who has been tipped to accept a second spell in charge of his national team this summer, has made noises about wanting to return home and his future has been discussed at length after Chelsea became frustrated at his continuous moaning about transfers. 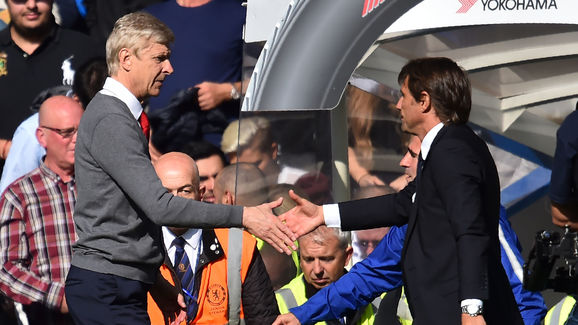 Emery, meanwhile, has almost led PSG to yet another Ligue 1 crown but, with the club's owners wanting a better fist of things in the Champions League, could replace him with Tuchel if the manage to see off interest from Chelsea.

Arsenal are not giving up hope of securing the 44-year-old's signature, but right now they are facing a losing battle to make him Wenger's successor.