​Juventus manager Massimilliano Allegri has been rewarded for his fine work with the ​Serie A Manager of the Year award for 2017, seeing off competition from Napoli's Maurizio Sarri among others.

The Italian was presented with the Panchina d'Oro trophy ("Golden Bench" in English) to celebrate a stellar 2017 for I Bianconeri. Under his guidance, ​Juventus won a sixth consecutive Scudetto as well as a third Coppa Italia victory in a row. In Europe, Allegri led his team to victories over ​Barcelona and Monaco on their way to the Champions League final, where they lost 4-1 to Real Madrid in Cardiff.

​Juventus' official Twitter account captured the trophy winning moment, with Allegri winning the award for the third time, previously triumphing in 2009 with Cagliari and 2015 with the Old Lady.

This season, Juventus have not lost in the league since November, winning 14 of their last 16 games to move from third to first, after a long spell trailing ​Napoli at the top. The Old Lady hold a two point lead over the Partenopei with nine games left, and have to be considered the favourites to win a seventh straight title. 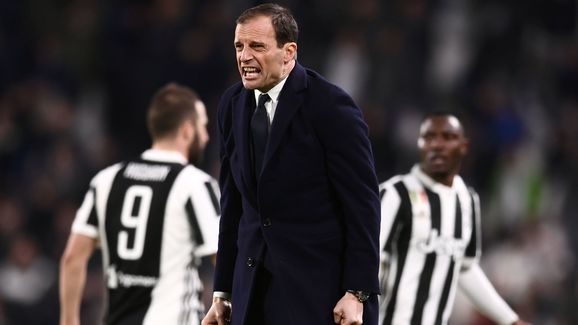 In the UEFA Champions League, Juventus ​came from behind to beat Tottenham in the last-16, prevailing 4-3 on aggregate to earn a quarter-final date with holders ​Real Madrid.

Allegri's men also have a Coppa Italia final in May with ​Milan, looking to win the competition for the fourth year in a row.