​​Manchester City will have to beat bitter rivals ​Manchester United if they wish to be reunited with former star Jerome Boateng.

The Bayern Munich defender is at the centre of a tug-of-war between the two ​Premier League giants, according to the ​Sun, with reports suggesting he may be free to leave the Allianz Arena this summer.

City boss Pep Guardiola worked with Boateng during his three-year reign in charge of the ​Bundesliga leaders and, if he managed to land the £50m player in the close season, would bring Boateng back to the club he left for Bayern seven years ago.

Boateng would likely be keen to link up with the Spaniard at his old Etihad stomping ground, but City's desire to poach him could be scuppered by United's supposed interest.

Jose Mourinho is on the lookout for a new centre-back after he lost faith in English pair Phil Jones and Chris Smalling due to their inconsistent form throughout the 2017/18 campaign.

With summer signing Victor Lindelof also struggling for form, Mourinho wants a combative, ball-playing defender to partner Eric Bailly in the heart of his backline and Boateng's credentials would fit the bill.

Sources close to the Germany international have alleged that he may be willing to leave Bayern when the summer window opens, but any move would likely not go through until Boateng's involvement with his national side at this summer's World Cup ends.

Boateng originally left City to bolster his chances of playing for Die Mannschaft due to a lack of regular minutes with the two-time top flight champions. 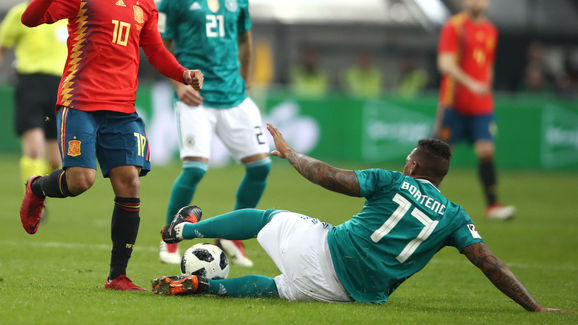 But he may complete a remarkable return if Guardiola manages to offer a decent sum of cash to prise him away from the German capital, and ​Bayern may look to cash in while Boateng's stock is high.

Boateng has struggled with injuries over the two seasons before this one, but has returned to feature regularly alongside Mats Hummels as Bayern storm to their domestic league title.

​Real Madrid and ​Barcelona are also thought to harbour a passing interest in Boateng, but the chances are that he will be plying his trade in Manchester instead of at either ​La Liga club.