​The agent of Hector Bellerin has revealed that he has had 'no contact' from any would-be suitors about the possibility of signing the Arsenal star.

Reports earlier this week had claimed that the full-back was on the radar of ​Barcelona, ​Manchester United and Napoli as the Gunners mulled over whether to cash in on the £50m rated defender.

Bellerin has struggled for consistency for ​Arsenal over the past 12 months - form that has led to the north Londoners discussing whether to keep him or not - but in an interview with Radio CRC (h/t ​101GreatGoals) the Spaniard's agent, Albert Botines, scoffed at those suggestions. 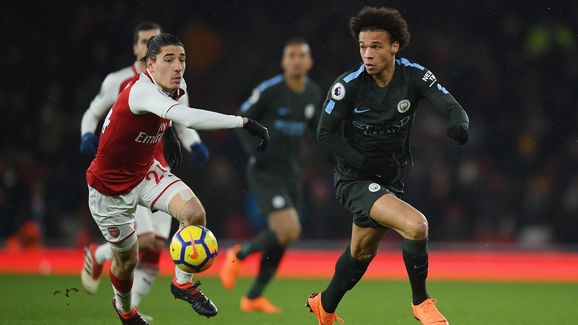 Maurizio Sarri's high-flight ​Serie A club are the latest to be linked with Bellerin's services but, despite admitting he had good ties to the Naples-based side, Botines said that there was nothing in the speculation about a move to Italy for Bellerin.

He said: "There’s no contact for Bellerin, no-one has sought me out. He’s happy, he’s recently renewed and he’s playing consistently. It’s true that every player always wants to grow, but right now it’s difficult [to see him leaving].

"I have a close relationship with [​Napoli sporting director Cristiano] Giuntoli, he’s a friend. I also know [President Aurelio] De Laurentiis and I follow Napoli.

Héctor Bellerín is basically our right back and our right winger, has been the only real option there for two years, turned City down for that shit and yet our fans don't like him because he didn't like a YouTube channel dedicated to monetising Arsenal defeats. Weird fanbase

"If the Azzurri were interested in some of my clients I would listen, because – just like ​Juventus – Napoli are not only a great team in Italy but also now in Europe. They play the best football in Italy, very similar to the Spanish one. As a club I’d compare Napoli to ​Atletico Madrid."

Bellerin was slammed by some sections of Arsenal's fanbase earlier in March after he suggested that they weren't true fans of the Gunners due to the longstanding criticism of manager Arsene Wenger.

That led to the Spain international having to clarify his comments on social media, but has still been a stick for some to beat him with given the level of his performances this term.