"I met him on numerous occasions after our playing careers had finished and he always represented both his club and his country in exemplary fashion," Charlton said.

"I feel proud to have been both an opponent and friend."

There is little higher praise coming from an individual who was a three time English champion, World Cup winner, European Cup winner and Ballon d'Or winner during his own storied career. 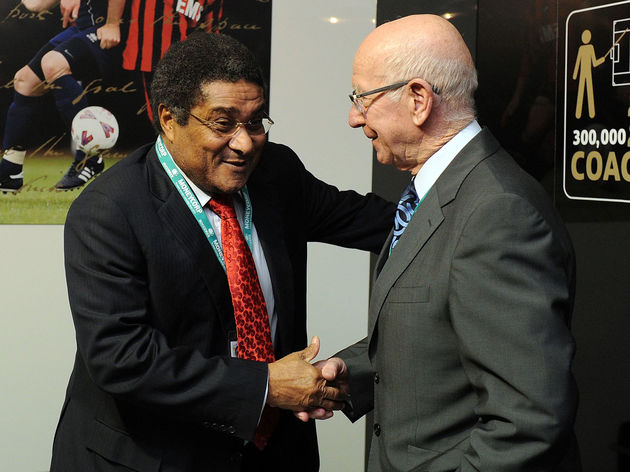 (You may also be interested in ​'World Cup Countdown: 13 Weeks to Go - 11 Things You Might Not Know About England's Final XI')

Eusebio himself was an 11-time national champion at club level, a European Cup winner and a Ballon d'Or winner. But it was Charlton's two goals for England in the semi final of the 1966 World Cup that denied the Benfica icon a shot at the single biggest prize in football.

Eusebio was at his very best in the mid-1960s. His Ballon d'Or recognition had come in 1965 at the age of 23 and he had scored 131 goals in just 94 appearances in the three seasons immediately prior to the World Cup - the 1963/64 campaign in particular saw him score 46 times in only 28 games.

He would continue that level of incredible goalscoring after the World Cup, too. The 1967/68 season, at the end of which he would meet Charlton's Manchester United in the European Cup final, would be the most prolific of his career after plundering 50 goals in all competitions.

Born in the colony of Portuguese Mozambique in south east Africa in 1942, Eusebio da Silva Ferreira began his football career playing barefoot on the streets. Having been rejected out of hand by a Benfica feeder team in Mozambique, he joined Sporting Clube de Lourenço Marques.

His incredible speed made him stand out from the crowd. He was also renowned for great agility and a ferocious shooting ability that later made him into a world class goalscorer. (You may also be interested in ​'World Cup Countdown: 13 Weeks to Go - Football's Coming Home, the Story of the 1966 Final')

Juventus were interested in the teenager at that time after a former Bianconeri goalkeeper scouting in the area recommended him to the Turin club. Sporting CP, who were affiliated with Eusebio's Mozambique club, were also keen, but it was Benfica who won the lengthy battle to sign him after offering his family a lucrative contract that Sporting were not willing to match.

A 19-year-old Eusebio, who had been secretly brought to Portugal in December 1960 and was even issued the alias, 'Ruth Malosso', such was Benfica's apparent paranoia that he would be kidnapped by Sporting before the transfer was fully signed off, eventually made his debut for the Eagles of Lisbon in May 1961.

It was too late for Eusebio to be involved in the club's European Cup triumph that season, with Benfica the team responsible for finally breaking Real Madrid's exclusive stranglehold of the fledgling competition, but he played and scored in 1962 final as Benfica retained the title, the last of his 29 goals in 31 appearances that season. It was clear that Benfica had found a gem.

(You may also be interested in ​'World Cup Countdown: 13 Weeks to Go - How the 1966 Tournament Changed Football & FIFA Forever')

Eusebio had made his international debut for Portugal in 1961, scoring in a World Cup qualifier against Luxembourg. Portugal missed out on the 1962 World Cup and the final round of the 1964 European Championship, but Eusebio was on fire in qualifying for the 1966 tournament to be held in England, which would be both his and the country's first major tournament.

Portugal found themselves drawn into a tough group with holders Brazil, a Hungarian side containing future Ballon d'Or winner and star of the 1962 tournament Florian Albert, and Bulgaria. The newcomers got off to the perfect start with a 3-1 victory over Hungary at Old Trafford, before then making short work of Bulgaria three days later at the same venue.

It was in the fixture against Bulgaria in which Eusebio, who had netted 17 international goals in the previous five years at a rate of almost one per game, scored his first World Cup goal. The Benfica star, joined in the Portuguese squad by six of club mates, then bagged a brace as Portugal beat Brazil 3-1 in their final group fixture. Both Bulgaria and Portugal had dished out rough treatment on Pele and Brazil's defeat in the third game, combined with Hungary's win, saw the holders knocked out.

The Soviet Union were the only other country who could match Portugal's 100% record, and Eusebio and co. progressed to the knockout rounds where they were to face surprise package North Korea at Goodison Park. The North Koreans had already written their name into World Cup folklore when they dumped Italy out of the competition early thanks to a now iconic goal from cult legend Pak Doo-ik up in Middlesbrough, and they threatened to do the same to Portugal.

(You may also be interested in ​'World Cup Countdown: 13 Weeks to Go - The Story of Pickles the Dog & the Jules Rimet Trophy')

North Korea scored inside the first minute of the quarter final and were remarkably 3-0 just over a quarter of the way through the game after a quick fire double put them virtually out of sight inside half an hour. But, in front of 40,000 people in Liverpool, Eusebio was ready to step up and save the day for his country in spectacular fashion.

The Black Panther pulled one back just two minutes after the Koreans had scored their third and cut the gap further when he converted a penalty shortly before half time. He completed his hat-trick not long after the break to tie the game at 3-3, with the go-ahead goal coming again from the penalty spot after Eusebio himself had been felled by two North Korean players after a driving run through the middle of the pitch, showcasing his great speed, strength and athleticism.

Eusebio's four goals without reply had given Portugal the lead, and Benfica colleague Jose Augusto netted a fifth to confirm the result in the closing stages. The North Korean fairytale, the comeback and Eusebio's brilliance have served to make it one of the all-time classic World Cup games.

Unfortunately for Eusebio, his impact in the semi final against England was not so decisive. With friend and rival Charlton having scored a fine goal in either half, a penalty from Eusebio in the 82nd minute, his eighth goal of the tournament, proved to be little more than consolation, forcing Portugal into a third place playoff against the Soviets instead of the final against West Germany.

#OnThisDay in '66: A Bobby Charlton double against Portugal sends England into the World Cup final! pic.twitter.com/IxhGVZvrqz

Eusebio scored his ninth goal of the tournament in that game, finishing as tournament top scorer in the days before the coveted Golden Boot award had officially come into existence. No other player had come close to him in the goalscoring stakes, with West Germany's Helmut Haller scoring six and England's Geoff Hurst and a handful of others on four.

Despite ultimately finishing disappointed, Eusebio returned to club action and picked up exactly where he left off with Benfica. He continued his prolific scoring for the Eagles until his departure in 1975 at the age of 33, 14 long years and 473 goals after his arrival as a raw talent. He had played his last game for Portugal in 1973, finishing with 41 goals in 64 appearances. But with the national side failing to reach a tournament again until 1986, 1966 in England was his grandest international stage.

In the final years of his career, Eusebio became something of a journeyman, playing all over the United States, as well as in Canada, Mexico and briefly back in Portugal. He eventually called it a day in 1979 after a brief spell with indoor soccer club Buffalo Stallions.

Scorer of 621 career goals in 639 career games for club and country, the late, great Eusebio will forever be a Benfica, Portugal and World Cup legend.