Claude Puel confessed that even he is sometimes surprised by the quality of ​Leicester City and England striker Jamie Vardy.

Vardy has scored 16 goals already this season and needs just one more to eclipse last season's tally. Only in Leicester's title-winning 2015/16 campaign did he score more in a season for the Foxes.

Leicester face ​Chelsea in the FA Cup quarter finals this weekend, and Puel said that he was hoping his team could rely on Vardy's goals to take them into the last four. 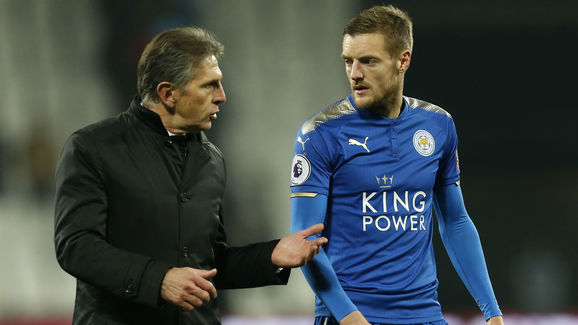 “He fights always and it is always difficult to defend against him because he has this fighting spirit to win battles and make good runs. He is also a technical player. He can make fantastic move with his touch."

Vardy has scored in five of Leicester's last seven league matches, the highlight among which was his strike at ​West Brom last weekend. Riyad Mahrez's long ball dropped over his shoulder and Vardy unleashed a brilliant first-time volley into the bottom corner of Ben Foster's net.

5 - Riyad Mahrez has provided five assists for Jamie Vardy goals this season in the Premier League; the same number as he did in their 2015-16 title-winning campaign and three more than in 2016-17. Service. pic.twitter.com/IdCimfICgN

“We can remember his last goal against West Brom – it was fantastic," said Puel. "Not many players can score with this quality. It was a tough goal. Sometimes I am surprised also with the quality of Jamie.”

Vardy famously scored in eleven consecutive ​Premier League matches in 2015, eclipsing Ruud van Nistelrooy's record. His performances that season earned him a place in England's Euro 2016 squad, where he scored against Wales.

If Leicester were to beat Chelsea it would be their first semi final appearance in the FA Cup since 1981/82, when they were in the second tier of English football. The Foxes have never won the cup, despite being runners-up four times.