​One of the best strikers in the world of football right now, ​Erling Haaland is way more than just a footballer when one tries to look at his past accomplishments as a child.

The Norwegian striker, who has been on fire for his new club ​Borussia Dortmund this season is also a world record holder for the longest standing long jump for 5-year-old's.

After his incredible performance for Dortmund in their ​2-1 win over PSG wherein he ​scored both goals, Twitter user @AndreOstgaard uncovered the remarkable stat surrounding Haaland's athletics career.
​

As a youngster, Haaland's father Alf-Inge is said to have tested his son's ability by taking him to play a range of sports, including cross-country skiing, handball and athletics.

And he excelled at athletics. In fact, he achieved the world record for the longest standing long jump for a 5-year-old on January 22nd, 2006, where he jumped 1.63 metres. 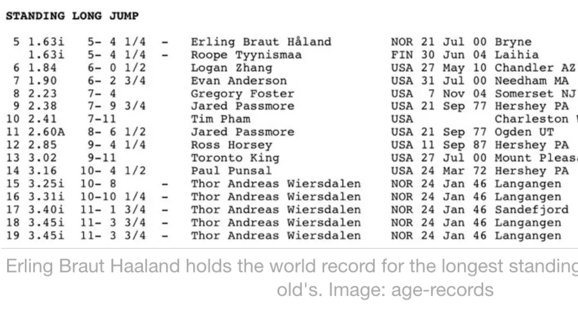 Alfe-Inge Haaland explained his decision to "test" Erling in an interview with Dagbladet. "It was before he started playing football," he said before concluded, "We used to take him to athletics so he could test himself. Erling played handball, athletics and cross-country skiing til he turned 14. Norway's handball manager wanted him to play handball."

That's right. Icelandic coach Thorir Hergeirsson wanted Erling to play handball instead of football but of course, football was his destiny.

"I thought it was nice to play tennis and handball next door." Alfie said when talking about his son's love of sports at an early age before concluding, "Versatility is important. You get to develop completely different sides of the body, and that can be positive no matter what you do."

Haalands father is, as most know by now, son of former Manchester City player Alfie Håland, but his mother Gry Marita, used to be national champion in heptathlon. No wonder the kids a monster.

​Well one thing is for sure, Haaland is going to be up there with the best strikers in the world in the near future.