The Foxes find themselves in second place after a fantastic start to the season, and could close the gap to Liverpool at the top of the table if they win on the south coast. They have won their previous four games, scoring 15 and conceding just once.

The home side were strong favourites for the drop at the start of the season, but Graham Potter has surprised many with Brighton's attractive play style. The Seagulls have won their previous three home games and sit 11th in the table. Leicester performed a routine 2-0 victory over an Arsenal side in turmoil before the international break, where as Brighton were beaten 3-1 at Old Trafford.

Brighton have an unfortunate amount of injuries and suspensions heading into this fixture. Lewis Dunk picked up his fifth yellow card of the season at Old Trafford, and will therefore miss Leicester's visit. Dunk's centre-back partner, Adam Webster, will also miss out due to an ankle injury sustained earlier in November.

Bernardo suffered a knee injury in September and Leandro Trossard was subbed off against Manchester United with a tight groin, but both players could make a return against Leicester. Jose Izquierdo will not feature, however, as he continues to nurse a knee injury which has kept him out of action this season.

Aaron Connolly suffered a hip injury last time out and is being assessed ahead of the Leicester game. Leicester are in a far superior position to Brighton, as their injury and suspension list much less substantial. In-form James Maddison has a 50/50 chance of featuring after suffering a calf injury while away with England.

Jonny Evans was sent home from international duty with Northern Ireland due to illness. It is not certain whether he will be fit to play in time for his sides trip to Brighton, but has been quarantined amid fears that the illness would spread across the camp.

Matthew James will miss out again as he recovers from a calf injury. He is still yet to feature this season, but Leicester look to be coping without the midfielder. 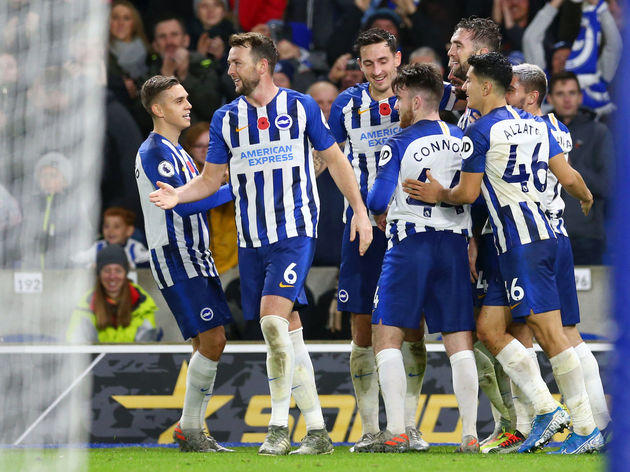 This fixture has been evenly contested over the years, with Brighton winning 13 and Leicester winning 14. However, given the current circumstances, Leicester are leaps and bounds ahead of their opponents.

Brighton have not beaten Leicester since their promotion to the Premier League in 2017, and have lost and drawn with the Foxes at the AMEX since then. Their last meeting in Brighton ended in a 1-1 draw in November 2018.

The home side have won eight from 16 home games against Leicester in all competitions, with most victories coming from when both sides were clashing in the Sky Bet Championship. Both sides have improved drastically since then. Leicester have won their previous five games in all competitions and only conceded two goals in the process. However, in the Premier League, they have won four of their previous five, with their last defeat coming against Liverpool at Anfield. This form has seen the Foxes rise to second place, and has striking similarities to their famous 15/16 season.

Brighton have won three of their last five, including a 3-0 victory over Tottenham, 2-0 against Norwich and a dramatic 3-2 win over struggling Everton. This has seen the Seagulls cement their place in 11th, with no danger of going down, but only a few points away from 5th place.

It seems like there can only be one winner here. Leicester have been in inspiring form, but the international break could have halted their momentum. Brighton have been strong at home and a surprise package so far this season, but Leicester have been devastating wherever they have travelled.