9 of Mauricio Pochettino's Best Games in Charge of Tottenham

Poor Mauricio Pochettino, his dynasty shot down before it even reached its final form, warning the board of the issues he was having who then decided to ignore him. Still, at least the payoff is reportedly healthy, and he'll almost certainly get a move to a bigger club.

Some Tottenham fans are understandably still in metaphorical mourning over losing one of the most important people in the club's history. Dry your eyes lads - wait until you read 90min's list of the best Pochettino performances before shedding those tears, eh? Right to the start we go. Pochettino's first game in charge of the club set the tone for his managerial reign with a bonkers 90-something minutes that made no sense whatsoever.

Just before the half-hour mark, Kyle Naughton was sent off for handling the ball in his own area, but Mark Noble missed from the spot. ​West Ham then had James Collins sent off, and a 10 vs 10 matchup came to a head deep into second half stoppage time.

​Harry Kane, a few months before he established himself as a starter, managed to break the lines with a wonderfully weighted through ball for makeshift right-back ​Eric Dier, who rounded Adrian and slotted home with his weak foot, sending the ​Spurs fans in the Sir Trevor Brooking Stand into delirium. Hello there, Jose Mourinho. In the midst of winning his last league title, the Portuguese boss was humbled at White Hart Lane on New Year's Day 2015.

Diego Costa put the eventual champions in front, but Kane equalised with one of his career-defining goals, cutting in from the left flank and brushing off several challenges before letting fly from 25 yards, his driven shot beating Thibaut Courtois at the near post.

They grabbed two more just before the break through ​Danny Rose and Nacer Chadli, before another seminal Kane moment made it four, turning away from Nemanja Matic and slotting the ball through John Terry's legs into the net. Chadli rounded off the Spurs scoring either side of sloppy Eden Hazard and Terry goals for ​Chelsea.

The blueprint for Tottenham's future was laid out on this night. There were several instances in the 21st century when a 'power shift' in north London had been threatened, but this was the first time that while it was feeling tangible, it didn't even matter in the heat of the moment.

Buoyed on by reaching the League Cup final and dismantling Chelsea at the Lane a month prior, Spurs fans' confidence that they could overcome ​Arsenal was dealt an early blow when Mesut Ozil scored with 11 minutes on the clock.

Spurred on by a bouncing home crowd, Tottenham rallied back in the second half, with Kane equalising from a corner after 56 minutes, before heading in the winner late on. A slow start to the 2015/16 season saw Pochettino come under a little bit of pressure, but he quickly alleviated it ​with a rampant display against league-leaders ​Manchester City.

Quick off the hype train from Wolfsburg that summer, Kevin De Bruyne put the visitors ahead, but Dier equalised on the stroke of half-time. The second half became the ​Erik Lamela show.

His free-kick found the head of ​Toby Alderweireld, who scored his first goal for Spurs to put them ahead. The Argentine was then fouled on the edge of the City area, and Kane scored his first of the season off the rebound from the resulting free-kick.

Lamela finished off the scoring with a fine solo goal, reaching Clinton Njie's low ball across (remember him?) and rounding Willy Caballero. The reverse fixture that season confirmed that Spurs were the main title challengers to Leicester, moving to within two points of the Premier League summit with victory at the Etihad Stadium.

A harsh call for handball by Raheem Sterling saw Tottenham awarded an early second half penalty, which Kane obviously hammered straight in. City knew their title charge would be over without a win, and charged forward in search of a leveller, eventually coming from Kelechi Iheanacho.

Manuel Pellegrini's side kept on coming forward, and Pochettino again turned to Lamela to turn the game around. With eight minutes to go, he ran at a retreating City defence and played in ​Christian Eriksen, who slotted under Joe Hart to seal the three points and Spurs' place as a contending club for years to come. 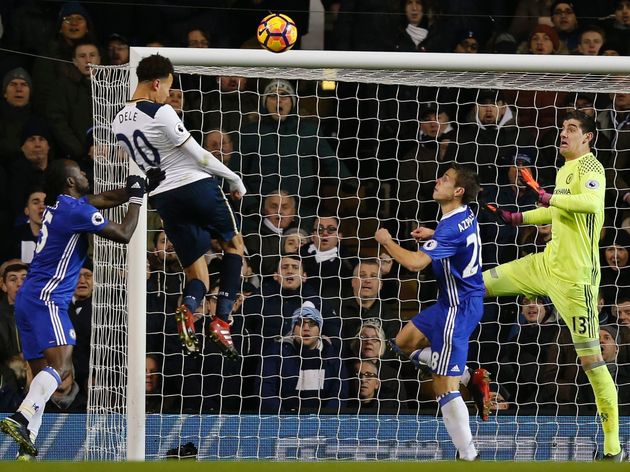 By 2016/17, everyone was aware of what Pochettino's Tottenham were capable of. A season where they finished second in the Premier League​ on a club-record 86 points saw them claim memorable and emphatic wins against Arsenal, Manchester City and ​Manchester United, but the victory against Chelsea to again announce themselves as contenders was the most impressive.

Antonio Conte's 3-4-3 saw the Blues win 13 games in a row, one shy of the then-​Premier League record, and Pochettino decided to match them up.

A new system had an immediate impact as Spurs scored two identical goals, with Eriksen twice picking out ​Dele Alli to head home. Chelsea's streak was over, and while Spurs would ultimately fall short of winning the title, they made another huge leap. After three seasons, English football was convinced that Pochettino and Tottenham were the real deal, but disappointing European campaigns meant the world still had to be won over.

A 1-1 draw at the Santiago Bernabeu did a lot for the reputation of both manager and club, but it was against ​Real Madrid at Wembley that Spurs lifted themselves up to the true top table of football.

A brace from Alli and a third from Eriksen​ saw them take a commanding 3-0 lead, at which point the back-to-back European champions shut up shop and allowed Tottenham to 'ole' the ball around them, before Cristiano Ronaldo grabbed a consolation. Well-documented problems trying to refresh the squad meant the domestic 2018/19 campaign​ was limp and lethargic. In the ​Champions League however, well...

After defying all odds to qualify from their group, Spurs then produced another shock in turning over Borussia Dortmund with considerable ease in the round of 16, leading them to a quarter-final with Manchester City.

Just five days after finally opening their new stadium with a nervy win against Crystal Palace, they truly returned to north London against Pep Guardiola's side. An early call for handball by Danny Rose led to a penalty after a VAR check, but Hugo Lloris saved Sergio Aguero's effort.

When Harry Kane limped off in the second half, you'd have been forgiven for thinking City would finally take control of the game, but ​Son Heung-min stepped up to score the game's only goal, giving Spurs a vital one-goal advantage that would eventually see them head to the semi-finals. When Pochettino first joined Tottenham in 2014, he claimed his goal was to make the fans proud of the club​. ​Mission accomplished.

Sissoko...here's Dele Alli...here's Lucas Moura- OH THEY'VE DONE IT! I CANNOT BELIEVE IT! LUCAS MOURA WITH THE LAST KICK OF THE GAME... TOTTENHAM HOTSPUR ARE HEADING TO THE CHAMPIONS LEAGUE FINAL...