​The first north London derby of the year ended all square as Arsenal clawed back a two-goal deficit in a riveting clash with Tottenham Hotspur at the Emirates Stadium on Sunday afternoon.

The Gunners' attacking trident of Nicolas Pepe, Pierre-Emerick Aubameyang and Alexandre Lacazette looked in ominous form in the early stages. However, it was Spurs who broke the deadlock when Christian Eriksen pounced on a poor save from Bernd Leno and duly tapped home

An away victory looked ever more likely as the first-half wore on, the Lilywhites leaving their opponent's backline chasing shadows. Several fierce shots brought impressive saves out of Leno, but the German could do nothing as Spurs deservedly doubled their lead.

Granit Xhaka foolishly went to ground when one-on-one with Heung-min Son in the box, his wild lunge bringing the South Korean down for an indisputable penalty. Up stepped Harry Kane - the record scorer in this fixture - to convert with aplomb.

Unfortunately for Mauricio Pochettino, his side were unable to hold out until the break as Pepe slid a neat square ball into Lacazette's path, allowing the latter to slip between two defenders before bursting Hugo Lloris' net with a feisty close-range blast. However, Sokratis' goal was chalked off as VAR spotted the Greek was marginally offside before bundling the ball in. Both clubs pushed for a winner, yet none was forthcoming as the points were shared.

Whatever Unai Emery is doing in training with this Gunners backline, he needs to change it immediately. They were carved open at will by an out-of-sorts Tottenham side; if that goes on, you can be pretty certain no silverware will be arriving at the Emirates Stadium in 2019/20. They cannot rely on their stellar forwards to bail them out every time. Arsenal are going nowhere unless they address the glaring problems at the back now. David Luiz is a quick fix and a long-term replacement for Laurent Koscielny is a necessity in January or next summer at the latest.

There were so many atrocious individual displays in red. Of course, not all Arsenal players can be tarred with the same brush as several showed fight and passion to get their team back in it. Aubameyang never gave up the ghost and had the last say in the encounter. It was a delightful finish, the kind of goal only a striker at the peak of their powers can score.

To beat Leno without nudging the ball beyond the post, the Gabon international had to make the perfect contact. Unsurprisingly, he was more than up to the task.

Arsenal's dynamic duo combining again to level it up against Tottenham in the north London derby. pic.twitter.com/W0mF0O7Fg2

Look at the power in this Lacazette’s shot. Man put all his range and hate for Spurs in one moment and almost killed Lloris there. My striker

Arsenal have made 13 errors leading to goals in the Premier League since the start of last season, more than any other club.

Bernd Leno has made more errors than any other player in this period (6).#ARSTOT pic.twitter.com/TcfmaPdrV9

If the Lilywhites frontline were as threatening on a weekly basis as they were in the opening 45, there would be little concern about them finishing in the top four. 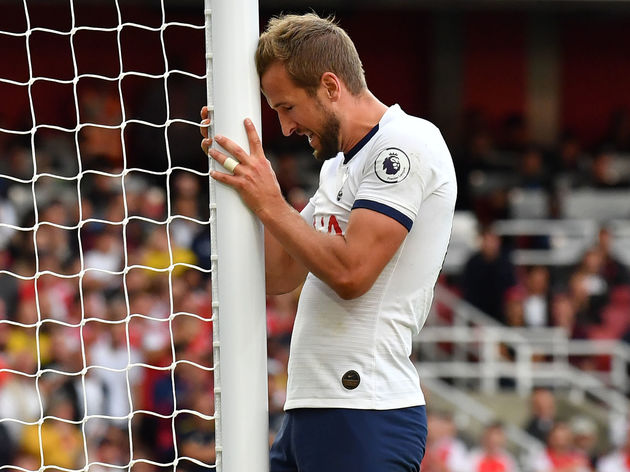 Consistency is their issue, though that is also true of Spurs as a whole. The entire team looked lost at sea in the home defeat to ​Newcastle United last week, but their toothless attack was what ultimately cost them.

They were dangerous at the Emirates, yet more than two goals could have come their way as they let their neighbours off the hook.

A north London derby away from home calls for bravery. To defeat your arch-rivals on their own turf, a team needs to be daring and continually pose a threat. Spurs didn't get the victory, though Son was immense as they looked to humble Arsenal.

Low-key Heung-min Son is Spurs key player especially in the biggest moments/matches but the media focuses on Harry Kane we all know why.

His work ensured that Arsenal had to be wary and remain focused. Unai Emery's recruits were as far from that as can possibly be and the forward made sure they paid for it.

Son was a thorn in the Gunners' side all afternoon, driving hard at the opposition defence and forcing countless errors. The 27-year-old was rewarded for his sterling performance as he drew a foul from Xhaka to get Tottenham a lead they should have held onto.

19 - Harry Kane's penalty was the 19th scored in games between Arsenal and Spurs in the Premier League; the most in a single fixture in the competition's history. Spotlight. pic.twitter.com/vfjdczO9Zl

The best football matches are the ones with some really good players, some really bad players and some really stupid players. Thanks Arsenal and Tottenham, that was ace.

Only five players have scored 50 goals in the Premier League for Spurs:

Arsenal travel to Vicarage Road in a fortnight as top-flight action resumes following the international break. ​Watford are yet to win a top-flight match this season, the Hornets picking up their first point of the year away to ​Newcastle on Saturday.

Whilst the Gunners do battle with the strugglers on Sunday, Spurs play the day prior at home to ​Crystal Palace.

The north London pair begin their respective European campaigns a matter of days afterwards, Tottenham hosting Olympiacos in the ​Champions League and Emery's men making a trip to Eintracht Frankfurt in the Europa League.