Jurgen Klopp's Reds face Napoli after besting Paris Saint-Germain at Anfield on the first gameweek of the Champions League, while they earned a deserved point against Chelsea at the weekend as they remain unbeaten in the Premier League.

Meanwhile, Napoli lie second in Serie A under Carlo Ancelotti, but are yet to show quite the same attacking verve as last season, while a 5-0 pre-season defeat to Liverpool will give the visitors reason for confidence.

Napoli and Liverpool meet for the first time in the @ChampionsLeague on Wednesday, but the teams have faced off in Europe previously ➡️ https://t.co/NcIjUrBOkp pic.twitter.com/TZzweyyrRP

The Stadio San Paolo - even when derided by Napoli's own chairman - is one of Europe's great venues and this is likely to be a much trickier test for the Reds and a better indicator of their credentials than victory over a limp Paris Saint-Germain at Anfield.

Here's everything you need to know about this one... 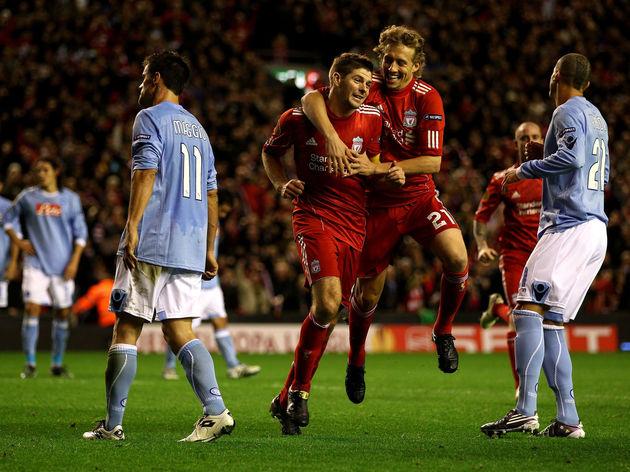 For all both teams' history in European competition, they've only crossed paths twice competitively - in the Europa League group stages of 2010/11.

While the first encounter at the Stadio San Paolo ended in stalemate, Liverpool - under the brief stewardship of Roy Hodgson - won the rematch at Anfield 3-1 thanks to a hat-trick from Steven Gerrard.

Interestingly, the clash was the first game that new owner John Henry watched live from Anfield, after taking over the club the month before.

​A glance at both team sheets from the night shows just how far the two clubs have come in terms of on field quality, while Marek Hamsik was the only player on either side who is likely to play on Wednesday night. Robertson got the better of Hysaj during last month's Nations League meeting as his Scotland side beat Albania 2-0.

Hysaj will have much better players around him for Wednesday's reunion with the Scotland captain but will have to nullify the threat Robertson poses from out wide.

The former Hull City star has three assists already this season (including one in the Champions League) and has become an important attacking outlet for Liverpool. Hysaj himself can also be an attacking full back for Napoli, but is less of a crossing specialist. Containing both Robertson and Mane will be a big test for the 24-year-old Albanian. Portuguese left back Rui was sent off at the weekend, as Napoli suffered defeat against Juventus. He will keep his starting lineup place for the Champions League clash for lack of better options, as first choice

Liverpool are missing only Adam Lallana and long-term absentee Alex Oxlade-Chamberlain from their travelling squad, meaning Klopp has all but a full strength team from which to choose.

Virgil van Dijk seems to be unencumbered by a slight rib injury and will continue at the back for the Reds as he did against Chelsea at the weekend, while the introduction of Naby Keita could be the only change to the starting lineup from that 1-1 draw.

Prior to their defeat to Juventus, Napoli's domestic form has been solid so far this season. However, Ancelotti have been occasionally suspect at the back, while the frontline (free-scoring Lorenzo Insigne aside) is still adapting to life after Maurizio Sarri.

The disappointment of last season's failure in Europe coupled with the stalemate in Belgrade last month puts more pressure on Napoli, who need to take as close to maximum points from their home games to stand a chance at qualification from a tough group. Even after a big win over Paris Saint-Germain last time out, Klopp's side are unlikely to come for a draw and Liverpool's forwards will fancy their chances.

However, Napoli's forward pose their own threats and Insigne, Dries Mertens and co on home soil could pose Liverpool's backline more problems than Kylian Mbappe and Neymar ever did.