"Everyone's got issues. There's a stigma in football that you earn a certain amount of money, how dare you have issues," Deeney explained during a feature on the latest episode of the BBC's Premier League Show on Thursday night. 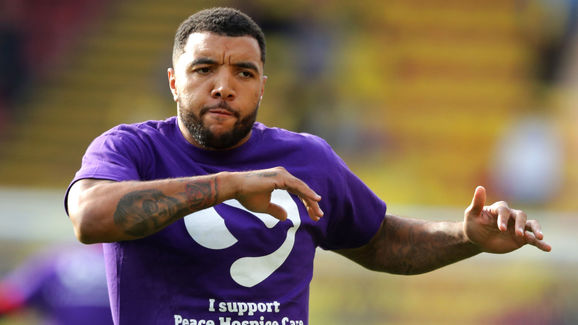 "It's perceived that money can take care of anything but in my experience it makes everything 15 times harder because you can't act 'normal' and you're not allowed to be vulnerable or weak but we all are," the 30-year-old added.

"It's gone from grieving, where I lost my dad and my grandad within 18 months, trying to learn how to grieve and how to let people back in, obviously when I went to jail I closed up really quickly.

"I always break it down I am three different people. I'm Troy Deeney the footballer, I'm daddy who the kids get to see and I'm Troy which a few of my mates get to see. I'm genuinely a big softie, I put this front on, and I'm just a laid back fool really.

"I've got a psychologist now, I still see him twice a week, it's gone from lifestyle to sports management, how to get me into that zone."

Earlier this month, a fitter, trimmer Deeney told BBC Radio 5 Live how he has improved his diet over the summer and massively cut down his alcohol consumption.

"It has just been giving up a lot of sugar, bread, milk and then it was the alcohol," he said.

"I've got an addictive personality so if I drink I don't have one or two I have 15 - or I have none. So now I'm having none, then picking the right times, like an international break when I had a few beers with my pals," he continued.

"I was cutting corners before, I used to think if I trained really well I could go home and eat whatever I wanted. I was also drinking after games thinking the next game was not until the following week but not being educated enough to know that if the game is on the Saturday, the Sunday and Monday are the most important in terms of you recovery."