Ronald'oh! Twitter Goes Into Meltdown After Cristiano Ronaldo Is Controversially Sent Off in UCL

These days we associate ​Cristiano Ronaldo in the Champions League with stunning overhead kicks, sublime hattricks and iconic images of him lifting the trophy on numerous occasions.
​
​However, not tonight! His Champions League debut for ​Juventus lasted just 29 minutes, after the forward was sent off for violent conduct against Valencia. 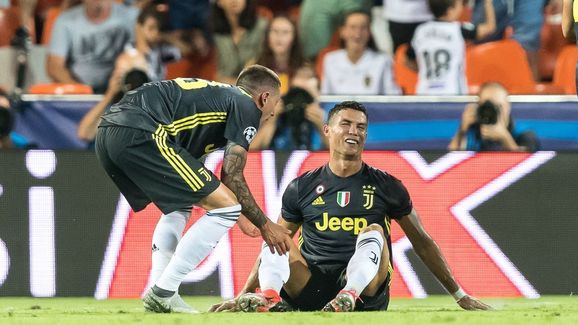 There was much confusion when the initial decision was given, and even once the replays were shown fans still weren't entirely sure what Ronaldo actually did. The cameras seemed to show the Portuguese hit Jeison Murillo's head, however, whether it was malicious or intentional is yet to be decided.
​
​Regardless, it is his first ever red card in the competition and he left his Juventus teammates a lot to do with still an hour left to play in their clash with the Spaniards. Once he was given his marching orders, Twitter users were almost instant to react to the incident and have their say.
​​​

Ronaldo gets a red card half an hour into his Juventus Champions League debut. Tears flowing.

That should NEVER be a red for Ronaldo. Unreal refereeing.

Ronald'oh. Terrible decision, but stupid to get involved in that nonsense in the first place. Just don't give the referee a decision to make. pic.twitter.com/MON4hd8V8I

Before ​Manchester United fans get too excited thinking he'll be suspended for both their clashes against Juventus, the Champions League rules state a straight red card warrants a one-game suspension. This means he'll miss the Bianconeri's next clash against Young Boys, but will still be eligible for both ties against United.​​