​Barcelona brushed aside PSV 4-0 at the Camp Nou, with ​Lionel Messi once again playing chief protagonist.

While many thought Mark van Bommel's side would come to Catalonia and lock in two banks of four, the Dutch manager clearly had other ideas. A high press from the off, PSV pushed Barca with a visible aggression.

However, La Blaugrana were happy to use width, as snappy first touch passes forced their visitors into early groundwork. Eventually, the anticipated game script did come to be, as Barcelona's mastery of possession saw the visitors limited to counter-attacking chances.

Lionel Messi is the first player in Champions League history to score eight hat-tricks in the competition.

The opening goal came on the half-hour mark, as the mercurial genius of Messi lifted a perfectly weighted free-kick past a helpless Jereon Zoet.

The second 45 saw Barça continue to dominate, with Philippe Coutinho seeing one of his signature finesse shots remarkably stopped by Zoet. Luis Suarez's fabulous effort hit the bar moments later, as a instinctive scoop chip from outside the box was only inches away from brilliance. 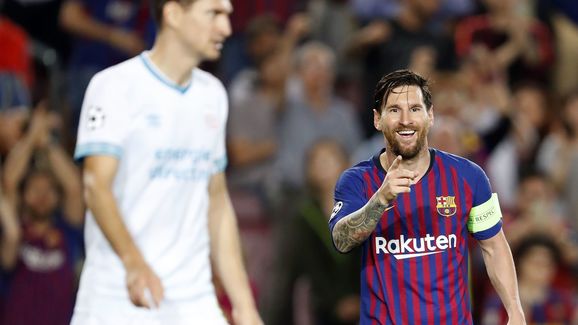 Messi grabbed his third with four minutes to go, as a weak foot finish sat Zoet down. It was a tidy assist from Suarez also, whose first time flick created a channel for the Argentine to motor down.

Not really sure what there's left to say about this alien man. Everybody can have their own opinion, but if a greater footballer has ever lived, I've never seen him. In Spain they have a phrase that goes as follows: 'un regalo de arriba', a gift from above.

Approximately 107 billion humans have lived on this earth, be grateful as you were born during the Lionel Messi era.

A finish with so many rotations that it'd make Euclidean geometry blush, Messi hit a shot that no mere mortal could've even dreamt of saving.

Dawg it’s really gotten to a point where every time Messi steps up for a free kick I expect it to go in 100%.

It was clear to see that the Argentinian demigod was enjoying himself at Camp Nou, with his comments earlier this season highlighting a need to win this competition once again. Dropping deep and drifting wide, anytime he got the ball it felt like something special was about to happen.

His second goal was a sumptuous half volley which he rolled into the net with disgusting ease. While Ivan Rakitic's assist was cute, the composure of both Messi's run and finish cannot be understated.

Lionel Messi is 31, which is crazy considering the average life expectancy of a goat is only 15. pic.twitter.com/P0pLy5ou0d

Dembele was spectacular too, as Barcelona's second goal saw him tie up both Jorrit Hendrix and Hirving Lozano before firing an absolutely pinpoint finish into the bottom right corner.

For the uninitiated, getting a red card while playing football isn't a good thing.

A stupid tackle on Lozano while 3-0 up, Umtiti's second booking signalled an early bath.

Umtiti stepped into that foul for his second yellow like he had plans and was trying to get suspended for the next game.

Now missing Barça's trip to Wembley, it's likely Clement Lenglet will cover for him against ​Tottenham. The Frenchman's second red card with La Blaugrana, idiotic moves such as these may worry Ernesto Valverde further down the road.

Strong throughout, the young fullback kept his opponents in check for the game's majority. Replacing an ​Atletico Madrid bound Santiago Arias, the Aruban showed flashes of talent.

The RB for PSV is called Denzel Dumfries. My new favourite name.

Brought in from Heerenveen this window, Dumfries has a big career ahead of him. Likely in van Bommel's plans for future fixtures, no personal sadness should be felt after his outing.

Booked for his foul on Dembele from which Messi floated in the game's opening goal, Viergever's mistake put PSV well and truly on the back foot.

Removed after 65 minutes, the Dutchman continually diced with death before van Bommel decided his time was up. His replacement in Nicolas Isimat-Mirit looked impressive as well. Barça will hope to continue their good form as they travel to England and face Spurs. Wounded after a late loss to Inter, Blaugrana will have to be wary of a side who took apart Real Madrid last season.

PSV showed bursts of good play, but were soundly beaten on the night. There is no shame in losing at Camp Nou, so the Eredivisie champions should still be full of confidence going into their home opener.