​Liverpool's midfield has been second to none so far this season, as the Reds come away from their first five games with a 100% record for only the third time in their history after a victory at Spurs on Saturday.

Possibly the only negative fans are taking away from the Spurs win, however, is the performance of Naby Keita, who some are saying looked out of place, and a shadow of the dynamic, explosive midfielder he promised to be in his first couple of games. 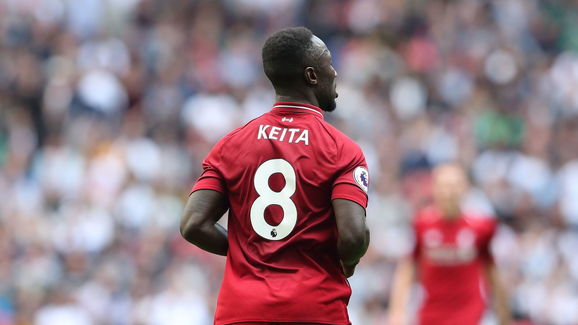 Keita has started four of ​Liverpool's five ​Premier League games, along with James Milner and Georginio Wijnaldum, and has been expected to act as the more creative of the three, with Wijnaldum relinquishing this role and operating more as a traditional 'number six.'

But some fans believe Keita isn't entirely suited to this role, and needs some time to adapt to the pace and physicality of the league before the Reds can rely on him to perform consistently - similar to fellow new signing Fabinho, who is yet to see a minute of league football under Jurgen Klopp.

While the overarching belief is that he will come good eventually, here's what some Reds fans have had to say about his underwhelming display.

Naby Keita struggling with the pace & physicality of such a fixture. PL is no joke.

From June 2018. Keita is a shadow of the player he was at Leipzig because he's being shoe horned into the most offensive midfielder of our 3. Not his game at all. But I'm clueless! https://t.co/soxiWMqTVv

Not reached his level yet. Needs more time. By Christmas we will see him at his peak.

To me Keita looks like he's kinda playing it safe. Maybe its part of the settling in process... Or maybe it also shows how far behind the bundesliga is.
But he will come good soon.

Milner has been given the responsibility of what Keita should be doing, in terms of receiving outside the lines and being the hub of everything, rather than Keita who is getting bypassed in possesion a lot.

Yep Keita's involvement as a 3rd CM isn't good enough, way to few touches. Needs to stay outside the lines to impose himself on the game https://t.co/TZmHKHteH4