Fiorentina boss Stefano Pioli was full of praise for his side after they dealt a major blow in 10-men Napoli's title hopes, with a 3-0 win at home on Sunday afternoon.

Speaking in his post match press conference (via ​Football Italia), Pioli complimented his team's work ethic on the pitch, and the way his side applied consistent pressure on ​Napoli after the sending off of Kalidou Koulibaly.

After everything that has gone in this Scudetto race - even just yesterday - of course it would have to be Fiorentina, the team whose fans hate Juventus the most, who serve it up to them on a plate by beating Napoli.

"The guys have today equalled the great performances we have already done with other great teams. We were good at provoking numerical superiority and exploiting it with precision. This match was close to perfection."

Fiorentina took the lead in the 34th minute when Simeone opened the scoring. Despite going close early on the in second half, Napoli were never really threatened La Viola's backline.

Pioli was also full of praise for Simeone who bagged his first career hat-trick. A second goal in the 61st minute and third in the final minute of stoppage time capped of a superb day for the 22-year-old, who is the son of Diego Simeone.

"He is a very determined boy who worked so hard to this day to get to this day," said Pioli. 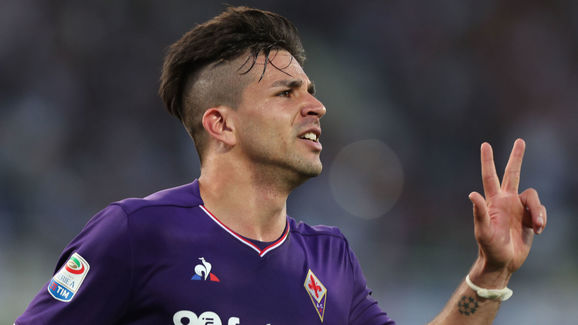 Pioli emphasised that the team has to shift its focus to the next game, and that they still have a lot to play for before the end of the season.

"Now we will have to know how to manage the energies, which are a bit diminishing. We have to prepare the match with against Genoa as best as possible.

"From Tuesday we have to work and stay focused to finish the season strong. We are creating a positive environment in Florence and we do not lack the spirit. Everyone has worked well and are ready to play."

Pioli was also sympathetic towards Napoli's title challenges, but remained focused on his team's task at hand and to perform well in the final three matches of the season.

"If the Napoli has played to win the ​championship we have our goals that are worth, for us, as much as theirs. We have to do the best we can until the end of the season."

Fiorentina have encounters with Genoa (away), Cagliari (home) and ​AC Milan (away) left before the season draws to a close.