City put four goals past a helpless ​West Ham side who, barring one spell of encouragement in the first half, failed to compete with Guardiola's side - who looked at their irresistible best. Pep Guardiola's men settled quickly into their familiar rhythm, starving the Hammers of any semblance of possession.

West Ham set up defensively, lining up with a compact back five, but like many before them, such an approach was far from a guarantee of success, and in the 13th minute the deadlock was broken by Leroy Sane.

Sane picked the ball up on his unfamiliar right-hand side and fired a finessed shot from the edge of the area into the the far corner of West Ham's goal, taking a decisive deflection off Patrice Evra, to leave Adrian helpless. 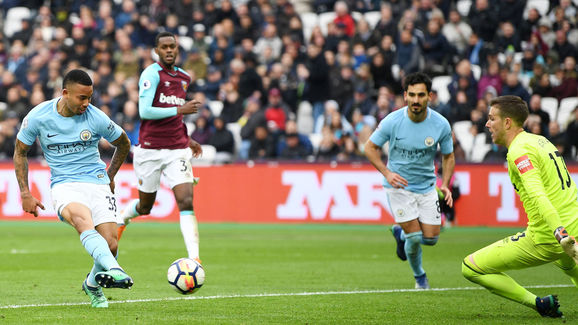 The blue waves of City continued to roll against the West Ham backline and in the 27th minute another fatal tide of City pressure made it 2-0.

De Bruyne demonstrating his ability once more to thread the ball through the eye of a needle, playing a ball in behind the Hammers defence - Adrian flying out to claim the ball but making a hash of the clearance.

Raheem Sterling collected the Adrian clearance but had his shot blocked, rebounding back to De Bruyne who played a fizzing cross The second half started in a similar fashion and it didn't take long for the scoring to resume. City pressed forward in typically devastating fashion, Sterling receiving the ball on the right side of the penalty area and playing a perfect ball into Jesus' path to leave the Brazil star with a simple tap-in.

As the half wore on, any chances of West Ham getting anything from the game faded under City's relentless and suffocating pressure. And if the three points were not already assured for City, Fernandinho made sure of it in the 63rd minute - the goal provided once again by Sterling after the winger played the ball to the Brazilian at the edge of the box, who comfortably swept home.

With 10 minuted remaining, much of the home support were heading for the exits, resigned to what was another heavy defeat for the ​Premier League's leakiest defence.