An own-goal from Fernandinho secured a 2-2 draw for Crystal Palace at Manchester City on Saturday, after Sergio Aguero's late double had put the champions on course for a comeback victory.

Having been pinned in their own half for the entirety of the opening half-hour, the Eagles stunned their hosts as Cenk Tosun nodded past Ederson after latching onto an intelligent header from Gary Cahill. Palace could have doubled their lead within a minute when ​City's Brazilian shot-stopper charged into no man's land and was beaten to the ball by Tosun. A delightful first touch saw him round Ederson, yet he was adjudged to have fouled Fernandinho before slotting into an empty net.

The Sky Blues' dominance continued after the break, yet the visitors showed resilience to defend their advantage until the closing stages. The Eagles were saved when a VAR review overturned a penalty against Jairo Riedewald as contest neared its conclusion. However, Roy Hodgson saw his side concede immediately after, with Aguero - a bystander for large periods - turning in a splendid cross from Gabriel Jesus.

The Argentine's delicate header on 87 minutes turned the game on its head and had the Etihad Stadium roaring, but silence soon fell upon the ground as Fernandinho inadvertently turned Wilfried Zaha's cut-back beyond Ederson.

Here's our breakdown of the encounter.

The accuracy simply was not there for City. They plugged away endlessly, but the deliveries were consistently sub-standard until Jesus entered the field of play. 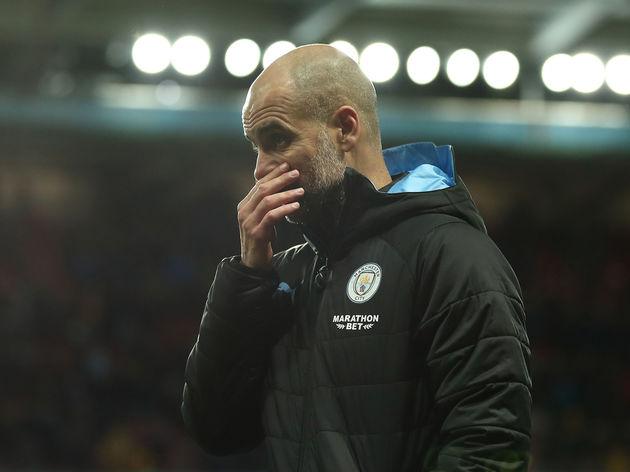 He added the impetus and precision that was desperately lacking for the Sky Blues, with De Bruyne the only other player looking sharp throughout.

Pep Guardiola will be asking questions about the players' mindset for several reasons following this troublesome display. Why were they so off-key in the final third, and how did they allow Palace to snatch a draw in the final minute of the game.

In the first half, De Bruyne pulled off a pass that perfectly captured why he is so revered. Out on the right wing, he spotted Bernardo free on the opposite flank. Using no backlift, the 28-year-old sent a raking ball that glided through the air and landed at the feet of his Portuguese teammate. It was a sumptuous performance from City's starring man, who orchestrated play with ease, helping the side carve out goalscoring opportunities.

If the others wearing sky blue had been as industrious as De Bruyne, this would have been a far more comfortable afternoon for Guardiola's recruits.

De Bruyne must be one of the best natural ball strikers in the world. Guaita standing in his head to keep this clean, back line under constant pressure can’t keep this up. #MCICRY #MyPLMorning #NBCGold #Palace

Captaining the team on his 300th @premierleague appearance!

Hodgson has whipped this Crystal Palace team into brilliant shape. They hadn't conceded more than two goals in a match since they lost 2-1 to Liverpool, 11 games ago. Their organisation and high energy kept City under pressure, despite the large share of possession Pep Guardiola's side had at the Etihad Stadium.

Hodgson shares his footballing philosophy with Sam Allardyce, amongst others. Sort out your defence, and the results will come. It's working wonders for Palace, who have a criminally-underrated manager in place.

Tosun wasn't exactly a fans' favourite at ​Everton, but he'll have earned plenty of respect from Palace supporters after this display at the home of the champions. The Turk marked his first start for the Eagles with a well-taken header, which was just rewards for his tireless running and neat interplay.

Along with Wilfried Zaha, Tosun led the attack for Palace, offering them an outlet once they'd settled in the contest.

How many times did Palace score today Pep?  pic.twitter.com/1SZIGH5hAL

Cenk Tosun was criminally underused by Everton, if he had a run of games he would have scored goals, their loss, Palaces gain #MCICRY

All square after a frenetic finish which saw City score twice in the final 10 minutes, only for Palace to conjure a late, late equaliser#MCICRY pic.twitter.com/JJUZ6U5pll

City venture to Yorkshire on Tuesday night for a clash with ​Sheffield United, the Blades having made Bramall Lane a fortress this term. Four days later, Guardiola and his side play host to ​Fulham in the FA Cup.

Palace welcome ​Southampton to south London on the same evening the Sky Blues face Chris Wilder's men, and it's the Blades who are the next team to travel to Selhurst Park, with that being a ​Premier League fixture.