Following a half-season in which:

We, using quotes from the very best Academy Award nominated films (so no Joker or Ford v Ferrari, sorry), rank the 15 best teams of the season so far.

Yes, that's right, we're back on the silver screen for one week only baybee. "How should I describe the mother? She's a bit simple. Young and simple." (Parasite)

How should I describe Franks Lampard's ​Chelsea?

They're a bit simple. Young and simple.

As while the Blues' young guns have shown how incredibly talented they are at times this season - against the likes of Arsenal and Wolves - they have shown their explicit naivety in games that they really should be winning (West Ham at home for example).

Chelsea are a work in progress. But overall, so far so good. And FC Hollywood's directors clearly didn't find it funny either, as they promptly sacked Niko Kovac after a disappointing run of results in Autumn; a run which included a 5-1 DEFEAT (yes, defeat) to Eintracht Frankfurt.

Now under the guidance of Hans-Dieter Flick, Bayern will be looking to turn their season around and close the four point gap between them and league leaders RB Leipzig. "I’m the keeper of this station, lad." (The Lighthouse)

Benfica are the keeper of the station, lad. Don't you other Primeira Liga teams forget it. "I intend to make my own way in this world." (Little Women)

Atalanta are doing it. They're actually doing it.

They're becoming a big club - one of the biggest and best on the peninsula.

The Bergamo club are fourth in Serie A again, they're in the round of 16 of the UEFA Champions League for the first time in their history, AND they've recently begun the redevelopment of the Stadio Atleti Azzurri d'Italia.

​Atalanta: a team on the growwwww. "You look a tiger in the eye, and trust without fear." (Jojo Rabbit)

Borussia Monchengladbach have appointed Marco Rose, and trusted him without fear.

By playing Rose's expansive counter-attacking style of football, 'Gladbach have become genuine title contenders this season, and halfway through the season they sit sandwiched between the mighty Leipzig and Bayern in the BuLi table. Nice one. "You might be demonstrating a failure to show appreciation." (The Irishman)

Unbeaten in all but one La Liga game at Camp Nou since 2017? Yes.

​Barcelona, you may have demonstrated a failure to show appreciation of the job that Ernesto Valverde did... "It's possible to be right and foolish." (Little Women)

Pep Guardiola's ​Manchester City score more goals than any other Premier League team - by some distance.

And yet, they find themselves 14 points adrift of Liverpool.

Man City may play the 'right' way, but bah gawd they rather foolishly can't defend for sh*t - and that's a serious problem. "You're the one with the big mouth, and I would really enjoy closing it, especially in front of all my friends. But my hands are registered as lethal weapons. That means, we get into a fight, I accidentally kill you? I go to jail." (Once Upon a Time...In Hollywood)

Mbappe and Neymar should be registered as lethal weapons. They are unstoppable.

If you play against them, they will kill you and all of your hopes and dreams. "It's like the tide going out. It goes out slowly, but it can't be stopped."

"I'll stop it. I've stopped it before." (Little Women)

It looks like Liverpool are going to win the Premier League. It looks like they can't be stopped - by anyone.

EXCEPT, maybe the man who stopped them before.

The man who, when the Reds were last on the brink of winning the title, swooped in to cost them their first league triumph since the dawn of time (1990).

That man's name is big Brendy baps, and the last time he stopped Liverpool from winning the Premier League it was a, well, it was a mistake...but he still did it...so there's still some hope yet... "I fell in love with him two seconds after I saw him. And I'll never stop loving him." (Marriage Story)

THE BEST OF THE BEST. "In a war, you go from point A to point B. Sometimes, you spill a little beer along the way. That philosophy make sense to you?" (The Irishman)

In a title race, you go from point A to point B. Sometimes, you spill a little beer along the way - you know, you drop a few points, you may even get knocked out of the UEFA Champions League in rather embarrassing fashion.

But, so long as you get from point A to point B, so long as you go on and win the Serie A title, the Champions League embarrassment doesn't matter. Inter know that, and in the second half of the season, they intend to put that defeat to Barcelona's Under-9s behind them and win their first league title in a decade. Real Madrid are back! They're actually back!

And d'you know why?

Because Luka Modric is back! Karim Benzema is back! Sergio Ramos is back!

All the golden oldies are back in form and, as a result, Los Blancos are now joint top of La Liga with the joint best defensive record and second highest goal tally in the league.

Hey! You're Real f**king Madrid. Don't you forget it again. So Maurizio Sarri has accumulated more points in his first season as a Juventus manager (after 19 games) than any other manager in the club's history.

And yes, more than Massimiliano Allegri.

No, I don't know he did it, and I ain't going to ask. It sure is impressive though. 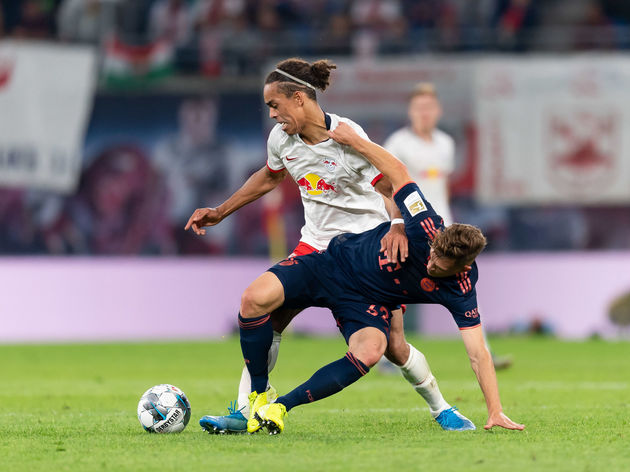 "Now, don’t be so darn foolish. It’s the calm before the storm, Winslow. She were a gentle westerly wind you’re cursing. Only feels roughly because you don’t know nothing about nothing, and there ain’t no trees on this here rock like your Hudson Bay bush. Nor’Easterly wind will come soon a-blowing like Gabriel’s horn. Best board up them signal house winders." (The Lighthouse)

Now, RB Leipzig have enjoyed an incredible first half of the season - their best half of a season in history (that's not even an exaggeration). Led by the five-year-old Julian Nagelsmann and three-year-old Timo Werner, 'Germany's most hated football team' are currently also Germany's best football team; sitting pretty atop of the Bundesliga.

But a storm is going. The south-westerly win from Bayern Munich will come soon a-blowing like Gabriel's horn.

So Leipzig best be prepared for it, and hope they have what it takes to stave off an all-mighty Bavarian bluster in 2020. They're through to the UEFA Champions League round of 16, hoping to retain the trophy.

They're through to the FA Cup fourth round after beating their inner-city rivals with their Under-9s.