Wolves completed a remarkable comeback against ten-man Manchester City on Friday evening, sealing a 3-2 victory in a match littered with controversial moments and a fair amount of VAR intervention.​

Twitter claimed Ederson as their first victim on Friday night, when the Brazilian experienced a rush of blood to the head - that's putting it kindly. An excellent long ball from Conor Coady sailed over City's defence and Ederson rushed out of his area like a man claiming the last turkey sandwich of the festive season. 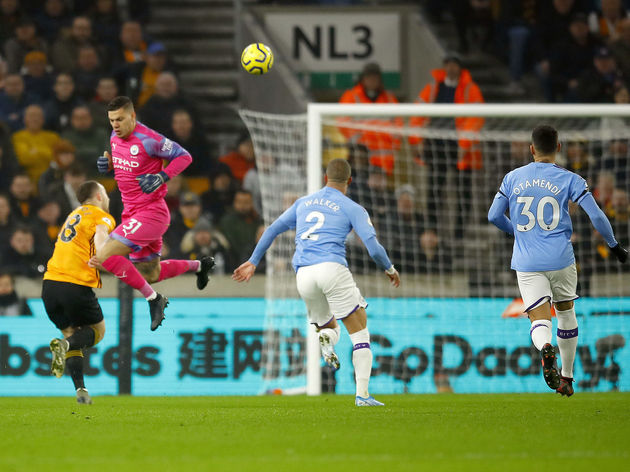 He wiped out Jota as the ball was flicked beyond him and there was only one outcome - a red card and the introduction of Claudio Bravo. The disappointment was that Sergio Aguero was sacrificed on his return to the starting XI.

Blimey. Ederson red card. Such a risk for keepers to charge out of their box unless they’re 100% sure of being first to the ball.

Disgraceful assault from Ederson. Remember him kicking off when mane brushed his face ?

Raheem S​​terling was up next, as VAR provided Manchester City with a contentious penalty and then ordered a re-take for encroachment in the area.

On both occasions, Sterling hit a tame effort to Rui Patricio's right and he saved comfortably - the City forward was lucky that he made it to the rebound on the second attempt. There were plenty of calls for Sterling to be relieved of his duties in future games, especially with Kevin de Bruyne on the pitch.

That is the worst part of VAR ... It's a joke! Never a penalty in the first place, nevermind the "encroachment" ... Bernardo Silva is further in the box than anyone AND Patricio had 1 foot on the line ... Would love to know what goes through the VAR's head to award that!

That's actually ridiculous, Sterling has no shame celebrating that when he literally missed two penalties in a minute

VAR went for us once  but can Sterling never take a penalty for us again ?

Given the question marks over the penalty decision and that a ​Manchester City player had been the furthest forward during the first attempt's encroachment, it was no surprise that VAR was the talk of Twitter.

VARchester City was even trending by the interval, as Liverpool fans took the opportunity to point out that it wasn't just the Reds benefiting from dubious VAR decisions.

Theatrics from Mahrez, then surely City players were encroaching more on the missed penalty? Don't let anyone say VAR doesn't help City! Is that the 2nd time they've missed a penalty but had it retaken until they score.

Wolves are the only team in the Premier League not to have had a decision overturned in their favour with the use of VAR.

​​​Raheem Sterling put City 2-0 ahead early in the second half, but this simply served as fuel for a Wolves side who have taken a fancy to late comebacks since their Premier League return. One man was more intent than the rest of the Wolves players in turning it around and, unsurprisingly, it was Adama Traore.

After bagging a brace in ​Wolves' victory at the Etihad earlier in the season, Traore scored a stunning goal with a long-range strike before muscling Benjamin Mendy off the ball to cross for Raul Jimenez's equaliser. The latter was particularly well-received on Twitter.

Adama Traoré has learned how to shoot, we're all doomed

Adama Traore pushed Mendy aside with his big body like Mendy was nothing. This guy is a bully #WOLMCI

​​When Matt Doherty was given all the time in the world to cut in from the right wing, play a quick one-two and shoot beyond Claudio Bravo with his left foot, the comeback was complete.

It was a magical moment for Doherty, sealed three points that put Wolves in touch of the top four, and provided Liverpool fans with even more belief that the 2019/20 Premier League title is heading to Merseyside.

Minutes after the full-time whistle, meanwhile, Fraudiola was trending on Twitter and Manchester City's title hopes were all but over.

3-2 Wolves. Doherty. What a comeback from Wolves. What a result for Liverpool. #WOLMCI

Wolves with a small squad and playing their regulars in Europa too are now 2 points behind 4th in late December and qualified for Europa knockout stages. What an incredible comeback to their poor start to the season.

Matt Doherty - Played a friendly against Wolves in 2010 for Bohemians in Dublin, had not made a competitive start for Bohemians at the time. Wolves invited him on trial, signed for £75,000. Now just scored the winner vs Man City.