​Bayern Munich begin their quest for an eighth consecutive Bundesliga crown at home to Hertha Berlin on Friday night.

Die Roten took advantage of a late-season Borussia Dortmund slump to gazump their adversaries last term, stealing the title by two points having trailed the Yellow and Blacks by nine in February. However, their manager Niko Kovac has lost two of his squad's leading men over the summer after veteran wing duo Arjen Robben and Franck Ribery both called time on their Bayern careers.

What a way for Ribery and Robben to say goodbye 

​Dortmund were able to exact some revenge and restore pride with a 2-0 defeat of the Bavarians in the DFL Supercup in early August, though the latter remain strong favourites to win the league having bolstered their ageing backline during the close-season.

Opponents Hertha placed 11th in 2018/19 and have some familiar names in their ranks, including one-time ​Chelsea forward Salomon Kalou and ​Manchester City academy graduate Dedryck Boyata. Nevertheless, they will need to produce a pitch-perfect performance to avoid leaving Munich empty-handed.

Here's our preview of the ​Bundesliga curtain-raiser.

Neither team have any injury concerns ahead of their league opener, though several new faces could be in line for a debut. ​Bayern secured the loan signing of ​Inter forward Ivan Perisic in the week and the Croat will be available to play should Kovac request his services.

French international Lucas Hernandez was brought in from ​Atletico Madrid during the summer, the centre-back switching to Germany for a fee of £72m. He is not the only expensive defensive purchase made by the champions, however, as the club also forked out £31.5m for his fellow World Cup winner, Stuttgart right-back Benjamin Pavard. Meanwhile, Hertha beat off several other contenders to land Boyata after the Belgian's contract with Celtic came to an end. ​Watford winger Dodi Lukebakio is another player to make the move to the capital over the off-season having agreed to leave Hertfordshire for £18m.

The visitors were the first club to beat Bayern in the Bundesliga last year courtesy of a 2-0 triumph at the Olympiastadion in late September, Slovakian playmaker Ondrej Duda doubling their lead moments before the break after target man Vedad Ibisevic had converted a penalty.

That was Hertha's first victory over their opponents in 15 attempts, although it also took them to four matches without defeat versus Kovac's recruits. The Bavarians would set that record straight five months later.

That hat-trick of results did little to change the look of the overall record; Bayern now sit on a total of 18 wins and Hertha on two, whilst there have also been six stalemates throughout history.

The hosts cruised into the second round of the DFB Pokal on Monday evening courtesy as they beat Energie Cottbus 3-1. Coman, Robert Lewandowski and Leon Goretzka all got on the scoresheet in a routine victory, though a late consolation for their opponents takes a bit of a shine off the win. 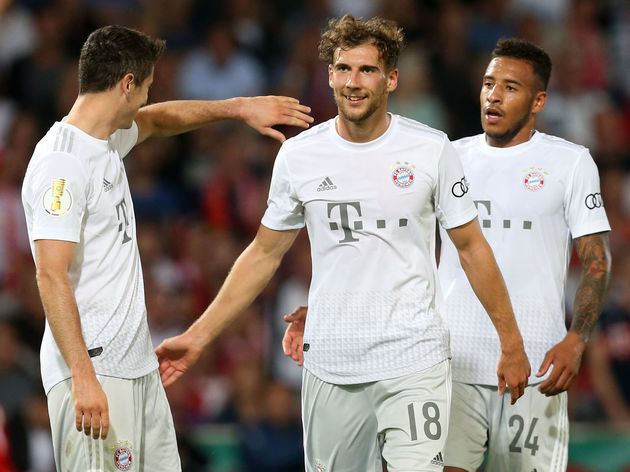 It was essential that Bayern progressed following their defeat at the hands of their fierce foes a week prior. Despite failing to beat Marwin Hitz between the Dortmund sticks, the Bundesliga favourites looked lively and threatening, with accuracy in front of goal proving their downfall.

Hertha have enjoyed a mightily encouraging pre-season, putting in some fine performances. Their 4-0 humbling of ​Crystal Palace stands out, with the Berliners thrashing Eichstatt in similar fashion on Sunday to book their place in the next round of the cup.

The visitors will no doubt be confident going into the new campaign off the back of an impressive summer. Nevertheless, a trip to the Allianz Arena is hardly an ideal beginning to league action and coach Pal Dardai will be under no illusions as he prepares his troops for a showdown with Bayern. It's a sizeable ask for Berlin to travel south to Bavaria and get a result. Should they come home with a single point, that would still be considered an enormous success. Unfortunately, it's difficult to imagine them avoiding defeat given Die Roten's firepower.