Full attention is now on their trip to Old Trafford on Sunday where they will face Manchester United in their first fixture of the new season.

Fans would have been concerned by Lampard’s slow start to his tenure as manager as they were held 1-1 by Bohemians in Ireland and lost 1-0 to Kawasaki Frontale in Japan. Results soon picked up after their key players returned to the squad, with a 2-1 victory over Barcelona being the highlight.

Lampard has already displayed his ambitions to use youngsters in his side, especially while their transfer ban is still in place.

Here’s how Chelsea should line up against Manchester United on Sunday.

Kepa Arrizabalaga (GK) – The world’s most expensive keeper lived up to his title in his first season at Stamford Bridge, making himself a fan favourite after several stunning displays. Kepa kept 14 clean sheets last season and is undoubtedly Chelsea’s number one. Cesar Azpilicueta (RB) – The Spaniard appears to be passed his best, but Chelsea’s skipper is still the club’s best fullback. The 29-year-old contributed five assists last season and will provide experience to Lampard’s side. Kurt Zouma (CB) – The transfer ban has left Chelsea struggling for defensive quality but the return of Zouma from his loan spell with Everton has brought back a more developed centre-back. The Frenchman’s power and speed will be required by the Blues this season. 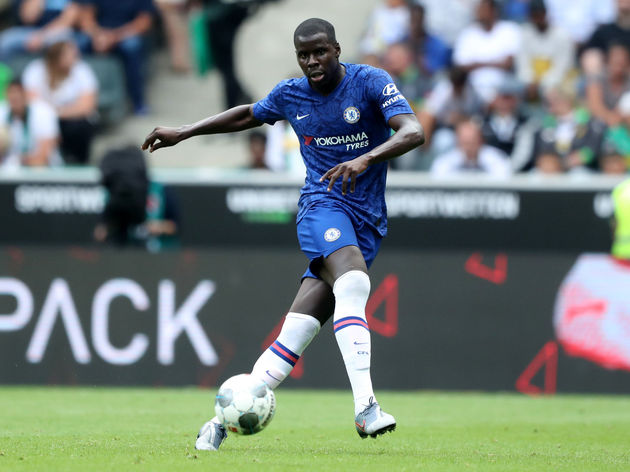 Andreas Christensen (CB) - Following the departure of David Luiz, Christensen will slot in beside Zouma. Emerson (LB) – The Italian looked to be the favoured left-back by Lampard in pre-season ahead of Marcos Alonso who endured a torrid campaign last year when his defensive vulnerabilities were highlighted. Jorginho (CM) – The former Napoli midfielder is expected to play a crucial role this year. Jorginho made the most passes in the league last season and controls Chelsea’s play. N’Golo Kante (CM) – The 2016/17 PFA Player of the Year struggled under Maurizio Sarri’s rule who insisted that the Frenchman played in a more advanced role. Kante is one of the world’s best midfielders and his partnership with Jorginho could dominate the league. Christian Pulisic (RW) – The American faces the near impossible task of replacing the departed Hazard. Pulisic has made a good start during pre-season in which he has shown glimpses of the exciting talent he is. He will have to adapt to the Premier League quickly if Chelsea are to be successful this season. Ross Barkley (AM) – Mason Mount has impressed in pre-season and was vital to Lampard’s run to the Championship play-offs with Derby. However, starting the youngster against Man Utd at Old Trafford may be too much too soon but the 20-year-old is expected to have a big season at Stamford Bridge. Barkley’s experience should be turned to for the opening game with the Englishman impressing in pre-season, scoring in their last four game including the winner against Barcelona. Pedro (LW) – The Spaniard was Chelsea’s second top scorer last season with eight goals but the former Barcelona winger must do more if the Blues want to succeed without the Belgian superstar. Tammy Abraham (ST) – Chelsea will need the 21-year-old’s goals this season. Abraham scored 25 times in the Championship last season to help Aston Villa return to the Premier League but will need to adapt to the step up in standard. With his height, speed and strength the Englishman has all the qualities to be the prolific striker Chelsea have been searching for.