The international break is finally over and we have an Easter weekend full of Premier League football to look forward to.

Arsenal return to action against relegation-threatened Stoke City, who have been known to nick some points from the Gunners over the years.

As the Potters' position becomes more precarious, and ​Arsenal's chances of making the top four grow slimmer, this game is certainly one to watch this weekend.

Here's the rundown of this Easter Sunday clash. 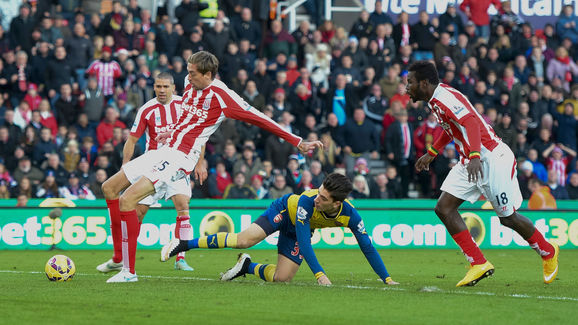 Stoke got the better Arsenal earlier in the season with a 1-0 win at the bet365 Stadium, but that was just the most recent time the Gunners couldn't do it on a cold, wet, windy night a Stoke.

In a meeting in December 2014 Peter Crouch scored after 19 seconds to give the Potters the lead over Arsenal. Bojan and Jon Walters added their own first half goals to make it 3-0 to the home side at half time.

It was almost 4-0 but Bojan's second effort was ruled offside. Arsenal began to pose a second half comeback starting with Santi Cazorla converting from the penalty spot after Mathieu Flamini was clipped by Mame Biram Diouf.

Aaron Ramsey followed up with another goal just two minutes later. The Gunners kept fighting for an equaliser, but their job was made all the more difficult when Calum Chambers was shown a second yellow card. The Potters managed to hold on to steal another three points at home to Arsenal.

In just 406 minutes on the pitch together in the Premier League this season, Arsenal pair Pierre-Emerick Aubameyang and Henrikh Mkhitaryan have combined for three goals – no duo has linked up for more at the club this season. (via @OptaJoe) pic.twitter.com/HRHAFXiggd

​​Club record signing Pierre-Emerick Aubameyang will continue to lead the line for the Gunners in the ​Premier League as he remains ineligible to play in the Europa League. With two goals in his last two matches for Arsenal, Aubameyang could be starting to hit his stride at his new club.

We are beginning to see glimpses of what Aubameyang can bring to Arsenal. It is clear that Arsenal have missed someone hanging off the shoulder of the last defender, making runs through the back line with lightning pace. His linkup with former ​Borussia Dortmund teammate Henrikh Mkhitaryan is also already proving fruitful.

Aubameyang will be aiming to net in his third consecutive game on Sunday, and could have a good chance to do it against a struggling Stoke side. The Potters have the worst defensive record in the division with 58 goals conceded. This has improved slightly with the appointment of Paul Lambert, who has not seen his side concede more than two goals since his takeover.

Ryan Shawcross will be leading out ​Stoke on Sunday and his defence will need to be disciplined and organised to keep out Arsenal's Aubameyang.

 “Jack trained yesterday, so he’s OK. Everybody else has come back and we’ll find out a bit more this morning.”#AFCvSCFC pic.twitter.com/vsqolMciF3

Jack Wilshere and Aaron Ramsey have both been passed fit after missing out for their countries over the international break. But with one eye of the Europa League next week, the pair could be rested to ensure they are fit to play CSKA Moscow in the quarter finals.

Sead Kolasinac picked up an injury on international duty, but Nacho Monreal will be expected to start a left back. Alexandre Lacazette has returned to training, but it may be one game too soon for him to be involved.

Charlie Adam will begin his three-match suspension after picking up a red card in Stoke's last match against ​Everton. Eric Choupo-Moting is still sidelined with groin problem, as is Steven Ireland, who has a calf strain. Ibrahim Afellay has been told by manager Paul Lambert to no longer report for duty after becoming fed up with his attitude.

 Paul Lambert insists history will have no bearing on the Potters' hopes of claiming a first ever @premierleague triumph at @Arsenal this Sunday.

​​Arsenal have won their last 10 home matches against Stoke City, who are yet to get a win at the Emirates Stadium. The Potters have also failed to win any of their last 10 away league games.

History would suggest that Stoke will not have much of a chance on Sunday, but they will be desperate to pick up some points as they edge closer and closer to relegation.

Arsenal know that their chances of making the top four are incredibly slim. Attention may be beginning to drift towards the Europa League as it becomes their best chance for Champions League qualification. Stoke could give Arsenal a good game here.